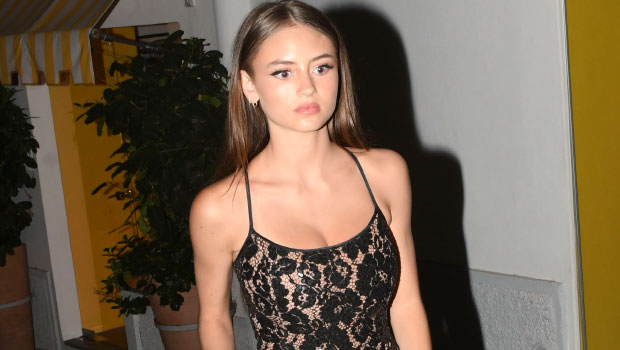 Leni Klum, 18, turned heads during her latest public appearance on July 30. The daughter of Heidi Klum showed up to the UNICEF ball in Capri, Italy in an eye-catching lacy long black slip dress and black strappy heels as she was joined by her birth father, Flavio Briatore, 72, former stepmother, Elisabetta Gregoraci, 42, and half brother, Nathan, 12. She posed for incredible solo pics at the La Certosa di San Giacomo location and had her long hair down as she also showed off natural-looking makeup.

When she wasn’t in the spotlight on the carpet of the event, Leni, her dad, and the rest of the family were photographed walking outside together. Flavio looked casual in a black t-shirt and pants while Elisabetta shined in a red strapless dress. Nathan wore an opened white button-down shirt and white pants and Leni took off her shoes for comfort.

Since Leni isn’t often seen with her father, the outing was a memorable one. She was adopted by her former stepfather Seal, when she was younger and spends a lot of time with her model mom, so the outing must have been a special one. Flavio was in a romantic relationship with Heidi from 2003 but went their separate ways in 2004, when she was pregnant with Leni.

Heidi Klum’s Family: See Photos Of The Model With Her 4 Children

Before Leni got attention for her UNICEF event appearance, she made headlines for sharing a photo of herself showing off a sunburn while wearing a brown cutout bikini. She was lounging on a chair outside and her hair appeared to be damp as she held the camera while taking the selfie. “a little past sunkissed,” she captioned the photo.

Leni’s eventful summer was kicked off after she graduated from high school in early June. Her proud mom, Heidi, took to social media to share a sweet video of her receiving her diploma in her cap and gown during the ceremony and she looked as happy as could be. “I am VERY proud of YOU @leniklum🥰❤️👩‍🎓#Classof2022,” Heidi wrote in the clip, which also featured her and her family’s cheers.