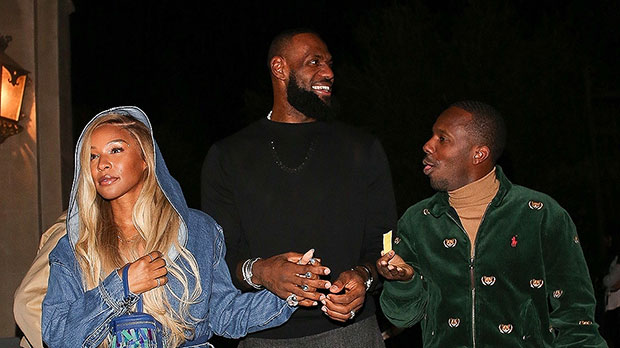 LeBron James and his stunning wife Savannah enjoyed a fun-filled Hollywood night out as they were spotted at Leonardo DiCaprio’s 48th birthday celebration in Los Angeles on Friday, Nov. 11. The NBA superstar kept it cool and casual in a black sweater and gray pants, as Savannah rocked a chic double denim ensemble and long blonde locks.

At one point in the evening, the cute couple were seen hanging out with Adele’s boyfriend Rich Paul. While it’s unclear if the Grammy-winning singer was also there to toast Leo, the bash was certainly a star-studded affair.

LeBron and Savannah have been stepping out more in public lately, a rare occurrence for the low-key couple. They recently headed out to Malibu for a sushi date at Nobu and a week before that they were getting some retail therapy in Beverly Hills.

The pair have clearly been growing more and more in love since they first met as kids growing up in Akron, Ohio. At 16-years-old, the two enjoyed a meal at Outback Steakhouse for their first date, Savannah recalled in an interview with Harpers Bazaar.

LeBron proposed to Savannah on New Year’s Eve in 2011, at a huge party that doubled as the iconic sportsman’s 27th birthday bash in South Beach, Miami — where he was living at the time while playing for the Heat. The couple dated for twelve years before they tied the knot on September 14, 2013. The lavish nuptials featured a performance of “Crazy in Love” by Beyonce and Jay-Z, according to Deadspin, along with a star-studded guest list, which included LBJ’s best friend Dwyane Wade and more.

LeBron Jr. (Bronny) was born on October 6, 2004, followed by the couple’s second son, Bryce Maximus, who Savannah gave birth to on June 14, 2007. They welcomed both boys before they married. LeBron and Savannah’s third — their first daughter — came after the wedding. Zhuri was born on October 22, 2014.