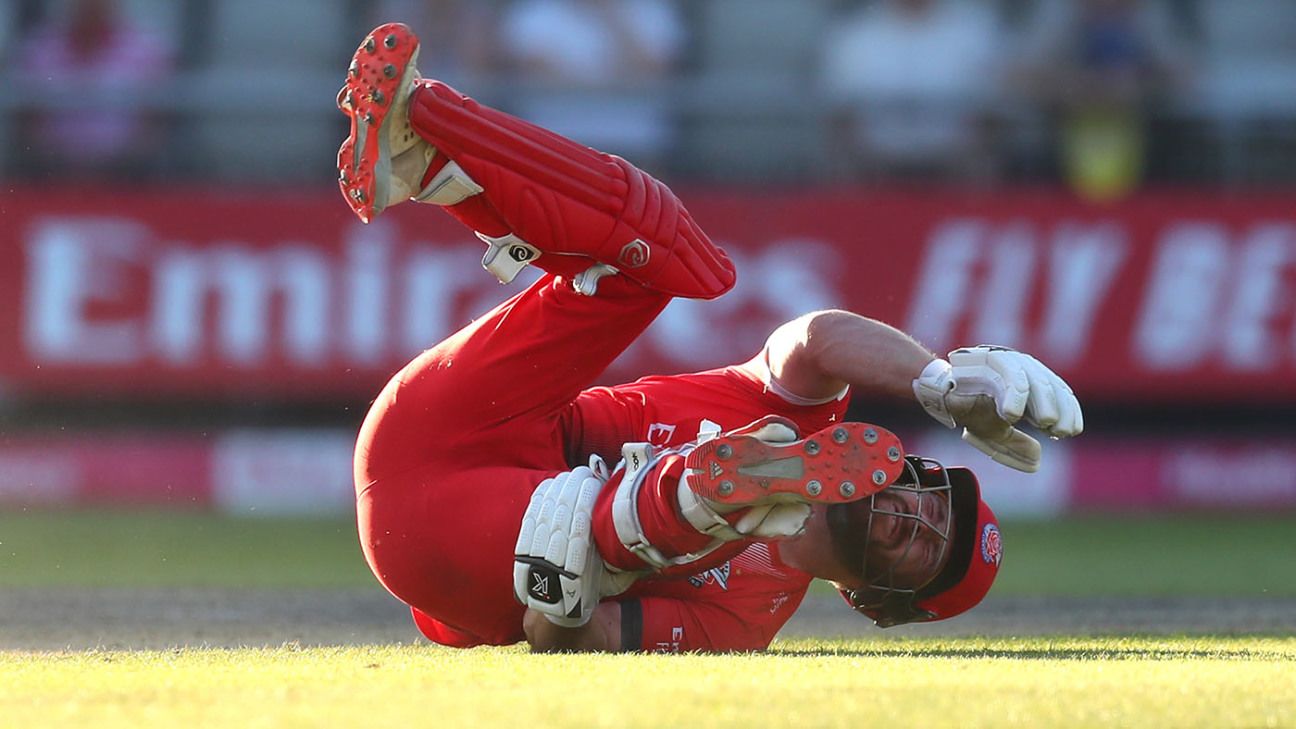 Those in charge of recording Roses folklore, pens and pads to the ready please. Joe Root, as a stand-in Yorkshire captain, was at the centre of one of the most debatable acts of sportsmanship (now there’s a word that, seriously, needs some urgent gender-neutral consideration) in Roses history. If it is not read about a hundred years from now then either the chroniclers have not done their job or county cricket has collapsed without trace.

Lancashire needed to win their final North Group tie to join Yorkshire in the quarter-finals of the Vitality Blast, but do not believe that Yorkshire were soft-pedalling as a result. They were tigerishly defending their inadequate 128 for 7 with Lancashire five down, 15 needed from 18 balls and enough tension to ensure that the result was not quite the formality it sounds.

Matthew Waite’s delivery to Luke Wells was worked into the leg-side with a single on offer, only for Steven Croft to hesitate and collapse in mid-pitch, clutching his hamstring as if he would never play again. Yorkshire chose not to run him out, it turned out to be cramp and he was able not only to resume, but celebrate a four-wicket victory with an over to spare as if he had drunk from the elixir of life in the meantime. That’s what qualifying for the last eight of the Blast means to people. Tell that to advocates of the Hundred.

Not since Marcelo Bielsa ordered Leeds United deliberately to concede a goal against Aston Villa two years ago will Yorkshire have debated acts of sporting integrity with such passion. It’s probably worth reflecting that the three players involved in the immediate decision had a combined age of 68 and have not actually played much professional cricket. The bowler, Matthew Waite, the fielder Jordan Thompson, the keeper Harry Duke. Integrity or largely confusion? It would be no surprise to find that some on Yorkshire’s coaching staff disagreed with their humanitarian stance (this is not often presented as a prime feature of Yorkshire cricket) and for the sake of history perhaps they should put their views on the record.

Root, impressively, seeking unity, and protecting all concerned, was a master of diplomacy. “As a side we made a very difficult decision under pressure,” he said. “It looked very serious at first glance. In many ways it was a relief it was nothing serious. I am sure there will be many different opinions. Many people would have handled it differently.”

(Forgive the personal intervention here, but as somebody who ruptured two Achilles tendons in mid-pitch in successive seasons in Yorkshire club cricket and was run out both times, once with crows of laughter, yes, it’s possible they probably would have done. Maybe I morally deserved those not outs after all? Acts of integrity, 30 years on, to the biased observer, seem a very good thing).

The umpires called a dead ball, although it is not sure at what point – and why not a dot ball? Yorkshire appear to have suffered twice over.

That decision appeared to be pragmatic, designed to negotiate a settlement that protected everybody’s interest. There was no right or wrong. There were no obvious arguments on the field. There was just half a second when three young players wondered what to do and opted for righteousness. It is not clear whether Root, a captain, who whether he likes it or not has become the moral conscience of England cricket, uttered an instruction. But he was right to suggest that players should be free to do as they choose.

But what of Croft, Lancashire’s Lazarus? “Two games in two days at 36 and a bit of sun has done me,” he told Sky TV. “I put the brakes on, they worked, and my legs just cramped up. I didn’t know where the ball had gone. They could have taken the bails off and credit to them that they didn’t.”

Just don’t get cramp in the final, you’ve had your chance, might have been Yorkshire’s suitable rejoinder.

There was little need to ask Croft how he was. His unbeaten 26 from 29 balls had concluded with a sprinted two and an uninhibited pull against Matt Fisher, with six needed from eight balls, that was almost intercepted, left-handed, by Thompson on the midwicket boundary only for him to fall into the boundary advertising and the ball to roll for four. He struck the next ball slightly squarer for the winning hit. He had the decency to curb his celebrations.

All this meant that Lancashire extended a winning sequence against Yorkshire in the Old Trafford Roses T20 that began in 2015. Simply put, but accurate for all that, they won it on the Powerplay. On a grabby, used Old Trafford pitch, this is where runs are most easily made. Yorkshire made 27 for 2, restricted by an entire top five (with the exception of Adam Lyth who got out early) which seemed to want to play the controlling role. Lancashire, by contrast, returned 57 for 3.

Lancashire understood the Old Trafford pitch and bought into the nature of what they had to do, no more so than the New Zealander Finn Allen, who made 22 from eight balls, easefully striking Lyth’s fill-in offspin for two successive leg-side sixes in the second over before he was bowled in what has become a very predictable fashion – careering outside off stump against the seam bowling of Matthew Fisher to leave his leg stump exposed.

And Lancashire had a champion with the ball up front, who would have deserved a headline on many other nights. Luke Wood‘s left-arm pace is always full of verve and on this occasion his length, his change-ups, his concentration, was also on the money. He returned a career-best 4 for 20 and to rub it in for Yorkshire he was born in Sheffield. He more than anyone left Yorkshire at least 20 runs short.

He had Lyth brilliantly caught down the leg side by Dane Vilas, who sprang athletically to his right to hold a pukka leg glance, and left Mark Stoneman uncertain with changes of length and pace before nipping one back into his off stump. Stoneman’s loan from Surrey, despite a half-century, had not been a success.

Root and Harry Brook, brought together after 2.5 overs, both wanted to play the long game before expanding. Root, the Test England captain, whose game is built upon it. Brook, the leading scorer in the Blast, whose success has been built upon a low-risk start. Wood had shaken Yorkshire and by the time both were dismissed (Root cutting, Brook bowled by the workaday offspin of Wells) Yorkshire had used more than half their overs in making 59.

There followed panic. Here’s one for the data analysts. What are the record number of balls in a second half of a T20 innings where batsmen swing above the ball without making contract? Yorkshire must be up there. Somehow, Gary Ballance, desperation etched on his face, emerged with a highly creditable 31 from 21 before Wood’s on-a-length cutter defeated his leg-side swipe.

At 64 for 5 off 7.2 overs, Lancashire could have lost the game. They should have reined in their aggression with three down, instead they adjusted with five lost. They had probably just about won it when Croft, innocently enough, collapsed in mid-pitch. But it is a rare Roses match that proves to be straightforward.