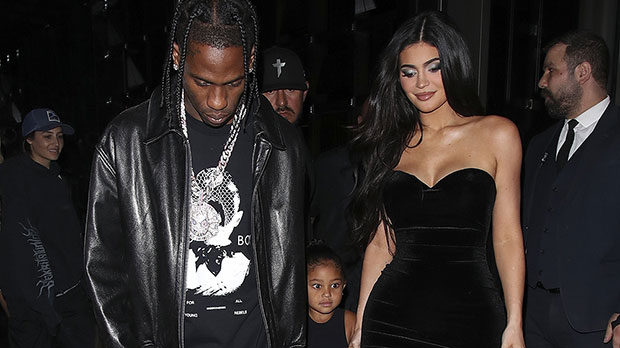 Kylie Jenner, 24, and Travis Scott, 31, held hands with their daughter Stormi, 4, on a family night out. The makeup mogul and rapper were in London, England on Thursday, Aug. 4, just two days ahead of Travis’ scheduled shows at the iconic O2 Arena. Kylie looked stunning in a strapless black mini dress and an open-toe mule shoe, as well as a small top-handle bag. The look was pure ’80s drama with the all-velvet theme, matching her straight, glossy hair and smokey eye shadow.

Ky lead the way from the car to Nobu’s Portman Square location in trendy Marylebone, and near celeb hotspot Chiltern Firehouse. Stormi sported a big smile as she twinned with her glam mom, rocking a black tank top and trendy leather pants, along with her curly hair in an up-do. Travis also matched little Stormi in an oversized black leather jacket, paired with a white-and-black tie dye pair of pants, and a large diamond chain necklace.

While the trip is primarily for Travis’ back-to-back concerts, Kylie also got some business in over the pond. She paid a visit to her Kylie Cosmetics counter inside the legendary Harrods Department Store, rocking a unique pink and black outfit by Commes Des Garcons (specifically the Lyra Jacket Glove and Harem Pants Set). “It’s so cute,” Ky exclaimed as she filmed the pink makeup chairs bearing her name before snuggling up to Stormi.

The mother-daughter duo then enjoyed a very girlie high tea in The Harrods Tea Rooms upstairs before going to a private shopping suite set up just for the 4-year-old. Plenty of Christian Dior book bags lined the shelves, along with toys and designer clothes. “Look at what Harrods did for Stormi to go shopping…is this not the craziest?” Kylie said as she filmed. “You are a spoiled, spoiled girl,” the makeup mogul declared.

As for Travis, the rapper has performed far and few between since the AstroWorld tragedy claimed the lives of 10 people in Nov. 2021. He is making a return to the stage at the O2 arena this week, followed by a short Las Vegas residency at the Zouk Nightclub inside of Resorts World Las Vegas.