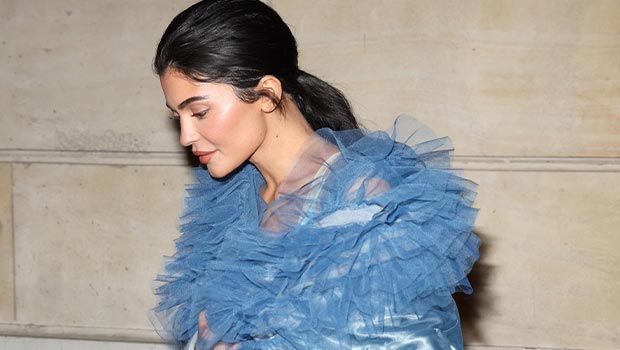 Kylie Jenner, 25, came to slay at Paris Fashion Week. The Kylie Cosmetics founder looked absolutely gorgeous for the Maison Margiela show on Sunday, Jan. 22 as she arrived in a blue tulle jacket style gown with satin details. She paired the fabulous ensemble with a lavender colored bag and white pumps that appeared to also be wrapped in a tulle material. Kylie kept her signature raven hued hair back in a simple ponytail and opted for a neutral, glowy makeup look to allow her ensemble to take center stage.

The images are the first of the Kylie Baby CEO since she finally both confirmed the name of her 11-month-old son Aire and shared the first photos of him. Naturally, she took to Instagram to share the updates about her second child with rapper and now ex-boyfriend Travis Scott. She simple wrote “AIRE” alongside a white heart emoji, sharing a sweet mirror selfie of 4-year-old Stormi‘s little brother. In another adorable candid, she tickled the baby as he laughed! He looked so cute in two solo images, including one where he stayed cozy in a sleeper and black beanie, and a second as he chowed down in a high chair with a messy bib.

Shortly after sharing the images, fans were confused if the name Aire — which is believed to be Hebrew and translate to “lion of God” — was pronounced “Air” or “Air-ey.” In a response to Instagram fan account @kyliesnapchat, who asked in a caption: “Do you think it’s pronounced air or airey?” the cosmetics mogul simply replied “AIR.”

The baby, who was born on Feb. 2, 2022 and is an Aquarius, was initially named Wolf Jacques Webster — however, Kylie revealed that she and Travis decided to change it last March. The original name, she revealed, was suggested by her sister Khloe Kardashian — while Jacques Webster is Travis’ birth name.

“Khloe said — the day before we signed — ‘What about Wolf?’ And I liked the ‘WW.’ So I just put Wolf Webster in that moment. But right after I signed the birth certificate, I was like…what did I just do? It’s part of his story, but his name has changed,” she said on Hulu’s The Kardashians, clearing up what happened.