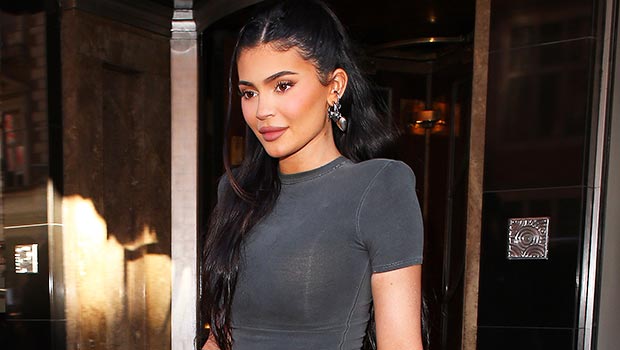 Kylie Jenner is ready for some gym time! The makeup mogul, 25, showed off her sleek black workout set in an Instagram story posted on Friday, Jan. 6, rocking a black sports bra and matching fitted leggings. She added a fresh white pair of sneakers as she filmed herself walking down the hallway of her $36.5 million resort-style mansion in the exclusive Holmby Hills area of Los Angeles. She also appeared to added stacked gold necklaces.

The Kylie Skin founder’s complexion was glowing as she appeared to go makeup free for the sweat session, keeping her raven hued hair back in a high ponytail. Her brows were immaculately shaped to frame her face, while her lashes — likely due too extensions — appeared to curl upwards for a touch of glam. Kylie was also sure to give her millions of Instagram followers a look at her derriére as she seemingly made her way to a gym in her home, which includes a pool with cabanas and many more amenities.

Kylie — who gave birth to her second child with Travis Scott,, a son, in Feb. 2022 — has previously shared that she got into working out via her sister Kourtney Kardashian, 43. She said on Instagram that the sister duo like “a lot of HIIT (high-intensity interval training)” but that she “needs to be constantly switching up the moves” to stay engaged. She explained that the two usually workout for an hour. “It’s hard, but it makes me feel good. Kourtney likes to blast music,” she also said, revealing that at the time, she liked to listen to pal PartyNextDoor‘s tunes.

Her older sister Khloe Kardashian has also shared her hot take about Ky’s workout routine in the early days. “She did come with Kourt and me one time, when [our trainer] Don was training us. Don does four quarters in each session and Kylie only stayed for one quarter,” the Good American founder, 38, said back in 2018. “When she was leaving, we were like, ‘Hello?’ She’s like, ‘No, I’m OK. I’m not feeling this.’ And she just walked away. She doesn’t have any remorse, either. We were like, ‘Kylie, you only did one quarter!’ and she’s like, ‘That’s all I wanted to do.’ OK then-you do you, Kylie!” Khloe laughed. How times have changed!