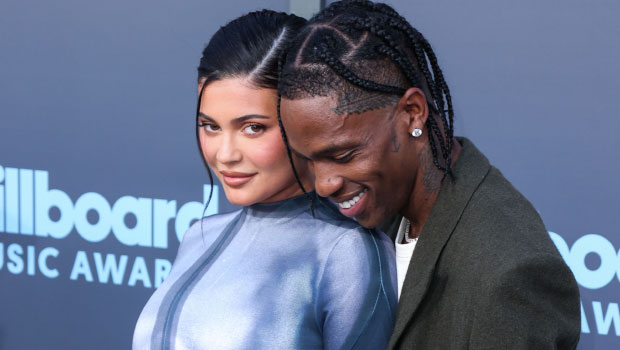 Kylie Jenner has announced the name of her baby born 11 months after giving birth to him! Sharing the first photos of the almost one year to her Instagram, she confirmed his name is Aire. He looked absolutely adorable in his Instagram debut as he snuggled up to his mama for a sweet mirror selfie, followed by several solo shots — including one of him with a dirty bib as he sat in his high chair. Another also showed Kylie sweetly tickling her little boy as he laughed!

Kylie gave birth to her second child with Travis Scott on Feb. 2 — just four years and one day after they welcomed their daughter, Stormi, into the world. Ten days later, the Kylie Cosmetics founder announced her newborn’s name was Wolf Webster! It was then revealed that his full name was Wolf Jacques Webster, according to the birth certificate obtained by TMZ.

However, about seven weeks after her little boy was born, Kylie announced that he was no longer named Wolf. “FYI our sons name isn’t Wolf anymore,” she shared on her Instagram Story. “We just really didn’t feel like it was him. Just wanted to share because I keep seeing Wolf everywhere.” She did not reveal his new name at the time.

The last time she spoke about her son’s name, she referred to him as “Baby Webster” and said she was simply not ready to reveal his new name. “We just haven’t fully legally changed it or anything, so I don’t want to announce a new name and change it again,” she told Extra in April regarding her hesitance. “So, yeah, we’re just not ready to share a new name yet.”

Kylie also revealed to USA Today in April that she knew she’d be changing her son’s name as soon as she signed his birth certificate. “We had to quickly sign the birth certificate, and then I knew the second I signed the birth certificate that I was probably gonna change his name,” she recalled. “It just didn’t suit him. We haven’t legally changed his name yet. We’re in the process, so it just wouldn’t feel right to share anything when we don’t have an official name.”

The same month, Kylie’s older sister Kim Kardashian also commented on Kylie’s renaming process. “There’s one name lingering but she really wants to make sure,” she revealed while on LIVE with Kelly & Ryan. “It’s a really big decision,” she added. “It’s the hardest thing ever in life is to name a child.”