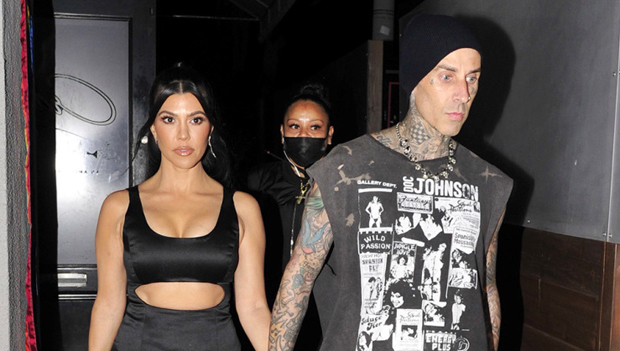 Kourtney Kardashian and Travis Barker may have tied the knot in Las Vegas over the weekend, her hairstylist suggested in a cryptic Instagram comment.

Kourtney Kardashian, 42, and Travis Barker, 45, packed on a lot of PDA in Las Vegas over the weekend while attending the Connor McGregor and Dustin Poirier fight. And now — thanks to a cryptic comment by the Keeping Up With the Kardashians star’s hairstylist — fans are wondering whether they also tied the knot.

The speculation started after Kourtney shared a series of sweet PDA photos from her sexy weekend with Travis. One photo in particular shows Kourtney and Travis walking down the hallway of a hotel, smiling and holding hands. And Kourtney’s hairstylist, Glen Coco, shared the set of images (seen below), while captioning them with the following: “…NOWWW I understand why ppl tie the knot in Vegas. There’s nothing like love AND a good time.”

Glen also added a chapel, crying and black heart emojis, leading some fans to believe Kourtney and Travis secretly got married. See his full caption above and below.

But that’s not all — Travis’ daughter, Alabama Barker, 15, also shared the same hand-holding photo in her Instagram Story and said, “So happy for you guys” with heart and cute face emojis. Kourtney’s initial caption also said, “What happens in Vegas”, leading some fans to speculate even more.

At this time, there’s no confirmation that Kourtney and Travis actually got married — HollywoodLife reached out to their reps for comments, but we did not receive immediate responses.

If Kourtney and Travis did get married, this would be her first marriage. She has never tied the knot with anyone she’s dated, but she does share three children — Mason, 11, Penelope, 9, and Reign Disick, 6 — with ex-boyfriend Scott Disick. Meanwhile, Travis Barker was previously married to Shanna Moakler from 2004 to 2008, and they share two children together: daughter Alabama, 15, and son Landon, 17. He was also previously married to Melissa Kennedy from 2001 to 2002.