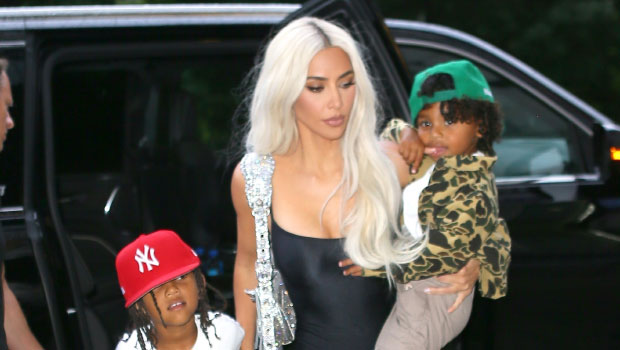 Nobody rocks a bodysuit quite like SKIMS founder Kim Kardashian! The reality TV icon and entrepreneur, 41, showed off her famous curves in a form fitting black bodysuit while leaving her New York hotel, on her way to visit Jimmy Fallon on The Tonight Show. Still rocking her blonde bombshell look from her Met Gala appearance in May, Kim finished the look with a killer pair of sunglasses, silver purse, and matching built-in stiletto boots. She went for a beautifully natural makeup look. On each arm were two of her kids with ex-husband Kanye “Ye” West, Saint, 6, and Psalm, 3.

Saint wore a red Yankees ball cap and finished his casually cool look with a flannel jacket, while Psalm wore an identical Yankees cap in green and a camo print jacket with matching sneakers. Kim’s latest bodysuit is yet more proof that she reigns supreme with the daring fashion choice. She’s been seen wearing a mesh bodysuit, a black leather catsuit, and even a bubblegum pink thong bodysuit – and that’s just a few she’s worn within the last year.

The appearance comes as her relationship with Saturday Night Live star Pete Davidson, 28, heats up. A source told HollywoodLife EXCLUSIVELY earlier in June that the adorable and inseparable couple is discussing the next logical step in their relationship. “Kim and Pete spend all of their free time with each other, so it only makes sense to talk about taking that next step and moving in together,” the inside source told us.

“It’s not a decision either one has taken lightly. Kim would never take that plunge without discussing it with all of her kids first,” the source explained, obviously noting Kim’s four children with Ye — Saint and Psalm, along with Chicago, 4, and North, 8. “At this point, Pete has spent so much time with her kids and he absolutely adores them. She kind of sees Pete as a big kid himself, and she loves seeing how well they all get along,” the insider said.

Pete is certainly bonding with the kids. He was recently seen taking Saint to Wal-Mart for a solo outing to grab cheese puffs, and in a separate outing, took him out for a lunch at The Cheesecake Factory at L.A.’s The Grove.