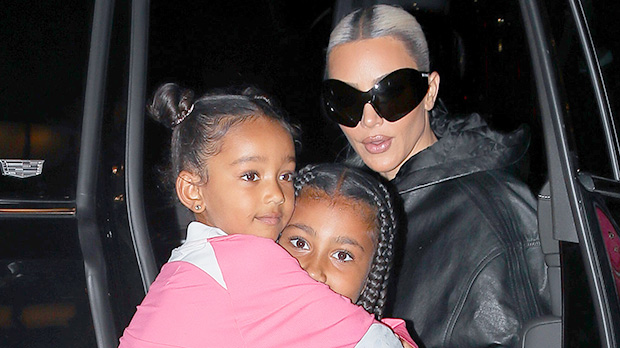 Kim Kardashian, 41, showed some not-so subtle support for Kanye West‘s business in her latest Instagram post. The reality star shared a carousel of new photos that featured herself, as well as her daughters North West, 9, and Chicago West, 4, wearing new glasses from her estranged husband’s brand, Yeezy. Kim doubled down on her shoutout to Kanye, 45, by mentioning the sunglasses line in her caption, writing, “YR 3022 YEEZY SHDZ.”

In the Aug. 4 photos, Kim and her two daughters wore matching black leather outfits as they all modeled the massive silver shades. The SKIMS founder, who is still rocking her fabulous blonde hair, threw up a peace sign as she took a snapshot with Chicago. In another photo, Kim cradled her youngest daughter in her arms as the two were still decked out in their leather outfits and Yeezy glasses.

North also got into the action for two different close-up selfies where she showed off the shades from her dad’s widely-successful brand. While North donned a curly hairdo, Chicago rocked adorable space buns with the front pieces of her hair braided. Kim, meanwhile, wore her hair straight. It’s been blonde ever since she transformed into Marilyn Monroe for the Met Gala in May.

At the start of this year, Kim and Kanye had a public feud that played out on social media for everyone to witness. The “Donda” rapper harassed Kim and her new boyfriend, Pete Davidson, 28. Come March, Ye reportedly told Kim that he’d be taking some time away and “getting help.” Kanye appears to have done just that and lately the exes have been spending a decent amount of time together while co-parenting their four children. Pete, meanwhile, has been away filming a movie in Australia which could be why Kim and Kanye are getting along so swimmingly.

But once Pete comes home, Kim apparently wants her former husband and current beau to “sit down face to face” and make peace once and for all. A source told HollywoodLife that Kim wants Ye to know that Pete is “a positive influence in Kim’s life, as well as their kids’ lives.” The insider confirmed Pete “is open” to hashing things out with Kanye in person, but the rapper may feel differently.