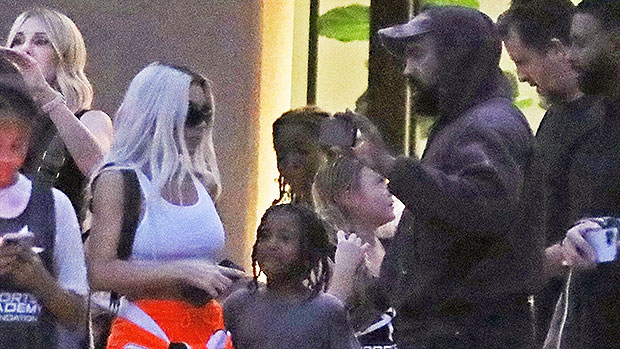 Kim Kardashian and Kanye West sure know how to keep fans guessing about their relationship! The estranged pair were spotted cheering on their daughter North West at her basketball game in Los Angeles on Saturday (September 17), marking the first time they were photographed together since Kim split with Pete Davidson. The last time the makeup mogul and the rapper were actually snapped together in public was last June, when they shared a lunch date.

In the photos, Kim and Kanye flank North, chatting with their eldest child as she finished up her basketball game. The reality star looked incredible in her white tank top and bright orange track pants as she placed her arm around North. Kanye, meanwhile, kept it cool in his usual dark hoodie and matching pants, as he too appeared quite talkative.

The outing comes only hours after it was reported Kanye was now dating Candice Swanepoel. After the “Famous” rapper was seen getting flirty with the supermodel at the Yeezy GAP sunglass event at New York Fashion Week earlier this week, the pair are now allegedly an official couple! This comes after Kanye was seen at celebrity hotspot Giorgio Baldi in Santa Monica a week before with a mystery woman!

In other Kanye dating news, he was said to have called it quits with Chaney Jones in June. However, the Instagram model denied she split with the father of four. On Kanye’s birthday on June 8, she posted a TikTok video, saying “Happy birthday baby I love youuuuu,” along with a short montage of loving photos of the couple. However, the pair have not been seen together in public since June. All this came after Kanye was hanging out with actress Julia Fox for a hot second at the beginning of 2022.

Meanwhile, Kim is back on the market after calling off her nine-month romance with Pete. A source EXCLUSIVELY told HollywoodLife that Kim is “single and ready to mingle” but she’s not looking to rush into any new relationship. “Love takes time and right now Kim doesn’t have the time to invest in anything serious. So, while she focuses on her billion-dollar empire, including the launching of her new ear pods brand, she is going to have fun. If this includes going on dates, so be it. But she is way too involved with her family and focused on herself right now to give away too much of this to anyone else.”

With their respective love lives being a bit up in the air at the moment, its lovely to see Kim and Kanye come together for the kids — the former spouses also share son Saint, 6, daughter Chicago, 4 and son Psalm, 2. Here’s to more amazing co-parenting by the famous exes!