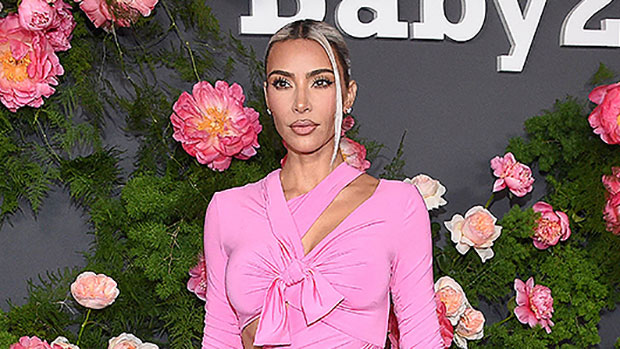 Kim Kardashian appeared back to her usual business of stealing the spotlight as she looked absolutely incredible arriving to the Baby2Baby Gala in Los Angeles on Saturday, Nov. 12. The mother of four rocked a form-fitting pink gown featuring cut outs and stylish bows to accentuate her physique. The gorgeous frock was accessorized with matching heels and a chic, crocodile skin Balenciaga mini handbag. Kim’s hair and makeup, of course, was flawless.

The business mogul was the recipient of the annual gala’s highest honor, the Giving Tree Award. Kim’s mom Kris Jenner and her sister Kylie Jenner were there to cheer on Kim during her big night. As at any KarJenner affair, the trio turned heads and were the talk of the town.

The fashionable outing comes just a few weeks after Kim showed off her incredible style for her 42nd birthday bash. Rocking a glittering silver bikini top, matching joggers and a wide, diamond-encrusted choker, ala Aaliyah, Kim took to her Instagram Stories on Oct. 22 to reveal she was taking Kylie’s private jet to Las Vegas to ring in her big day when wind conditions forced her to turn around and land back in Los Angeles.

According to her captions, the plan was to have a birthday dinner at celeb hotspot Carbone and then catch Usher in concert at his Vegas residency. However, the always resourceful mother-of-four made lemonade out of lemons and continued to celebrate herself by taking the shindig mobile on a “party bus” and stopping by In & Out to grab some of their famous burgers.

Kim was celebrating her latest orbit around the sun as a single gal, with her romance with Pete Davidson hitting the skids in August. Meanwhile, her ex Kanye West, whom she filed for divorce from in 2020, has been getting into hot water recently with his rants, including a few antisemitic ones, which caused several companies to cut ties with him. Meanwhile, the former exes are still in a custody battle over their four kids: North, 9, Saint, 6, Chicago, 4, and Psalm, 3.