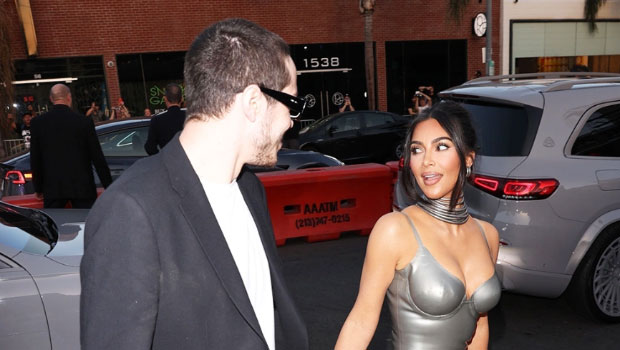 Kim Kardashian has a lot to juggle as a mother of four, a reality star and a makeup mogul. With such a hectic lifestyle, any form of support she finds is obviously welcomed. When her boyfriend Pete Davison showed up at a Los Angeles courthouse on April 28 during Blac Chyna’s defamation trial against her family, Kim was completely moved by the simple sign of loyalty. A source EXCLUSIVELY told HollywoodLife that it “meant the world” to Kim to have Pete by her side.

“Kim has always been a very independent woman who can take care of herself. But that doesn’t mean she can’t appreciate some support every once in a while, even if it comes in the form of just being there for her,” the source explained. “Knowing that someone has her back is one of the most important things to Kim. So even though Pete didn’t need to be there in court, in a strange way it made Kim feel safe and protected just by showing up and showing he cared. Having him there by her side when she knew he didn’t have to be meant the world to Kim.”

Not only did Pete appear alongside the family — including Kris Jenner, Khloé Kardashian, Rob Kardashian and Kylie Jenner — he even swooped in to kiss Kim in the hallway outside the courtroom, which really proved to her that “he’s serious about their relationship in the same way she feels about him,” per the insider. “She thinks it’s nice to have someone that she feels genuinely cares about the things that are going on in her life. That means more to her than anything which is one of the reasons Pete means so much to her. It’s not about spoiling her with material things or trying to impress her. Loyalty means much more.”

A second source EXCLUSIVELY told HollywoodLife that Pete’s unwavering support — especially when her ex Kanye West was attacking him on social media — is not lost on Kim. “He has been there for her through some super tough times,” the source began. “She was sure that he was going to dip when she was going through the Kanye stuff, and he didn’t. He stood by her side and helped her get through it. Kim didn’t want Pete to have to deal with this lawsuit and court battle because it did not involve him.”

Pete may have been the good luck Kim needed, as she was found not guilty of defamation charges in Blac Chyna’s suit on April 30. Chyna, who shares 5-year-old daughter Dream with Rob, is suing for $100 million after she claims the Kardashians had her E! Network reality show with Rob, Rob & Chyna, cancelled. “Kim has been so stressed out over it and being cleared of defamation today has been such a huge relief,” the insider continued. “He insisted and he would not have gone to the courthouse if he genuinely didn’t care about Kim and her well-being. He has shown her that he will be there for her during whatever she is going through, and this means the world to her.”

Meanwhile, the trial will continue on May 2 as the jury deliberated on Friday and were not able to reach a verdict for the remaining Kardashian defendants.