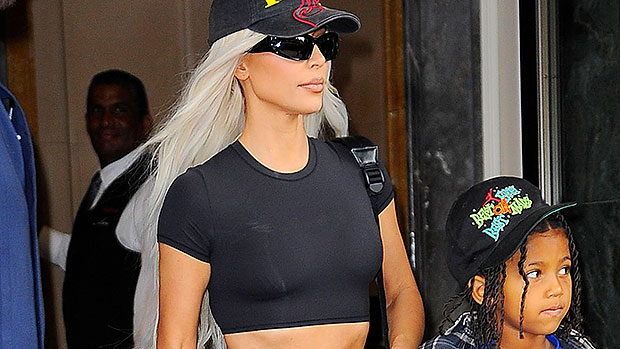 Kim Kardashian, 42, isn’t known for doing things quietly. So when it came time to celebrate Saint West‘s 7th birthday, she had something special planned — a trip to an LA Rams game for everyone! The SKIMS beauty took to Instagram with a pic on the field and a sweet tribute to her son.  “Happy 7th Birthday to my baby boy,” she wrote alongside a snap of her arms wrapped around her second child as he held a football. “I love you so so so much! I love seeing you grow into the kindest soul ever. Mommy loves you forever and ever!” Kim looked particularly stunning in her new honey blond hair color and a pair of shades, while Saint wore sweats and a jersey.

Perhaps even better, the Rams and the NFL also took to Instagram to share a joint post of Saint’s favorite player Jalen Ramsey meeting the thrilled second grader and his guests for some pics and football autographs. Saint proudly wore a #5 jersey in honor of the NFL great and has been seen doing so multiple times in the past.

Plenty of Kim’s 334 million followers on the platform poured into the comments thread to congratulate the aspiring young athlete and comment on his rapid growth. “The sweetest boy in all the land,” commented Saint’s aunt Khloe Kardashian, 38. “When did he get so big????” wrote a follower, while another remarked, “ONE THING ABOUT KIM SHE ALWAYS GOES ABOVE AND BEYOND FOR EACH BIRTHDAY” alongside several star emojis. “Awe this looks like such a fun party,” reacted a third.

It’s worth noting that Kim’s embattled ex-husband, Kanye West, with whom she finalized her divorce last week, did not appear to be at the party — despite a clause stating that he was allowed to celebrate with the family if everyone agreed. “The parties both shall have access to the Minor Children on special days like birthdays and, if they should both choose, they can celebrate together,” the documents obtained by HollywoodLife stipulated.

Still, birthdays have previously been a source of contention between the duo, who also share North, 9, Chicago, 4, and Psalm, 3. Ye seemingly picked a fight with the Kardashian clan back in January, accusing them of not “allowing” him to know where Chicago’s 4th birthday party was. However, he was later seen chatting up former mother-in-law Kris Jenner, 67, at the party in a video posted to Travis Barker’s stepdaughter Atiana De La Hoya‘s Instagram stories.