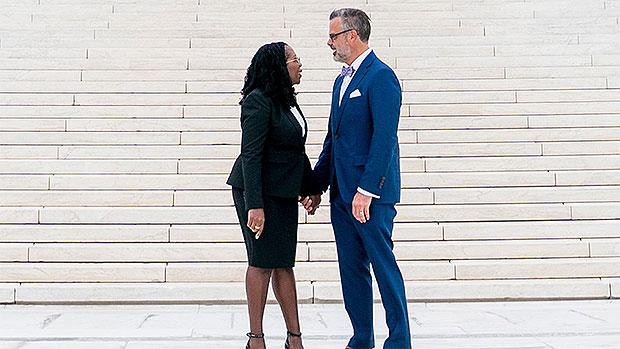 Update (10/01/22): Ketanji Brown Jackson received her official commission to the Supreme Court on Friday (September 30) during the traditional investiture ceremony. It marked the first time the attorney took her seat on the bench, cementing her place as the the court’s first Black woman judge. Her loving husband of 25 years, Patrick G. Jackson, was by her side, holding her hand and giving her a kiss after the historic event, as seen below.

Update (6/30/22): Ketanji Brown Jackson was sworn in as a Supreme Court Justice on Thursday, June 30, about 2 months after being confirmed by the Senate.  Of course, when his wife was sworn in for the historic occasion, Patrick was there to show his support. Chief Justice John Roberts, who administered the oath, shouted him and their daughters Talia and Leila out before the Justice was sworn in. “I would like to recognize Dr. Patrick Jackson, who is here, her husband, and her daughters Talia and Leila,” he said.

Update (4/7/22): Ketanji Brown Jackson was confirmed for the Supreme Court on Thursday April 7. Her husband has been super supportive of her throughout the confirmation hearing process. She’s expected to be sworn in after Justice Stephen Breyer retires at the end of June, per CNN.

Original: Ketanji Brown Jackson is getting closer to being confirmed as a Supreme Court judge after two more GOP senators have announced their vote. Alaskan Senator Lisa Murkowski and Utah Senator Mitt Romney will both vote to confirm Kentaji as a judge. Both Republican senators join Susan Collins of Maine, making it likely that their vote plus support from Democratic senators will be enough for her to win the position.

As Ketnaji gave her opening statement in the confirmation hearing to become a Supreme Court justice, her husband Dr. Patrick G. Jackson was right by her side on Monday March 21. As his wife delivered a moving speech about why she’s qualified for the highest court in the country, her husband was seen tearing up while he watched her. The SCOTUS nominee even included her thanks for her husband in her statement. “I would like to introduce you to my husband of 25 years: Dr. Patrick Jackson. I have no doubt that without him by my side from the very beginning of this incredible, professional journey, none of this would have been possible. We met in college more than three decades ago, and since then, he’s been the best husband, father and friend that I could ever imagine. Patrick, I love you,” she said. Find out everything you need to know about Patrick Jackson here!

1. Patrick is a surgeon

As his wife introduced him, Patrick has been a surgeon for over two decades. He’s a Washington D.C.-based surgeon for the MedStar Georgetown Hospital. His areas of focus include abdominal wall reconstruction, cholecystectomy, and much more. He graduated from Columbia University’s medical school in 1995 and completed residencies at Massachusetts General Hospital.

Ketanji and Patrick got married in 1996, but they met when they were both still students at Harvard, via the Miami Herald. While Patrick was going through his medical residencies and fellowships, Ketanji moved to Boston with him where she had her first daughter, as she opened up about in a a March 2017 lecture.

With the couple’s emotional moment during Ketanji’s opening statement, it should come as no surprise that they seem like an absolutely perfect pair! Ketanji has spoken about the pair’s unlikely pairing during the lecture, calling her husband “a quintessential ‘Boston Brahmin,’” before mentioning how different their upbringings were. “He and his twin brother are, in fact, the sixth generation in their family to graduate from Harvard College. By contrast, I am only the second generation in my family to go to any college, and I am fairly certain that if you traced my family lineage back past my grandparents — who were raised in Georgia, by the way — you would find that my ancestors were slaves on both sides,” she said. Even though their life’s before meeting may have differed, she’s also said that they share similar habits. “Patrick and I are in fact those long-suffering early to bed, early to rise kind of people.”

3. He has two daughters with Ketanji

Patrick and Ketanji are parents to two young women: Talia, 21, and Leila, 17, and Patrick clearly isn’t the only one who’s excited about Ketanji’s SCOTUS nomination. In fact, Leila once penned an emotional letter to then-President Barack Obama to nominate her for the Supreme Court when she was just 11. “She’s determined, honest and never breaks a promise to anyone even if there are other things she’d rather do. She can demonstrate commitment and is loyal and never brags. I think she would make a great Supreme Court justice,” she wrote in the letter, according to The Associated Press.

One of the most interesting facts that came out about Ketanji when her nomination was announced was that she was related to former House Speaker Paul Ryan. The connection to the former Republican presidential candidate came through Patrick’s twin brother’s marriage. Patrick’s brother William is married to Dana Little Jackson, who is the former House Speaker’s wife Janna Ryan’s sister. With their family connection, Paul has been an advocate for Ketanji, even across the aisle. When Ketanji was announced as a SCOTUS nomination, he tweeted out his congratulations. “Janna and I are incredibly happy for Ketanji and her entire family. Our politics may differ, but my praise for Ketanji’s intellect, for her character, and for her integrity, is unequivocal,” he wrote.

Janna and I are incredibly happy for Ketanji and her entire family. Our politics may differ, but my praise for Ketanji’s intellect, for her character, and for her integrity, is unequivocal.

Paul had also served as a character witness for her when she was appointed as a district court judge in 2012. He offered a similar sentiment, while mentioning that they’re related through his in-laws. “She is an amazing person, and I favorably recommend your consideration,” he said.

5. He’s gushed over Ketanji on many occasions

Patrick has shown that he’s an incredibly supportive husband and he clearly adores his wife. He tweeted about his love for Ketanji on his since-deleted Twitter account, per The Associated Press. “Happy Loving Day! I am especially thankful to be walking through life with a brilliant and compassionate partner who still takes my breath away, made possible by sacrifices like Richard and Mildred Loving,” he wrote in a tweet commemorating the Loving v. Virginia Supreme Court decision.

That’s not the only time that Patrick has shown just how much he dotes on his wife. Early in her career, Patrick would go to court after his shifts at the hospital to see what his wife was doing during her early days as a law clerk. Federal Judge Patti Saris said that he’d raised some red flags for some people in the court who didn’t know him, when he’d show up exhausted after his time at the hospital in a March 2021 interview with NPR. She said that a court marshal thought he was homeless and offered to take him out of the court. While he may have looked out of place in the courtroom, he certainly adored his wife to go watch her at work after long hours at the hospital!