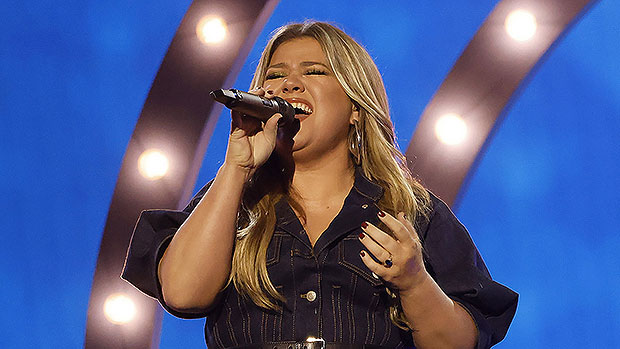 Kelly Clarkson graced us with her presence at the 2022 CMAs. She hit the stage with Kelsea Ballerini and Carly Pearce for a rendition of “You’re Drunk, Go Home.” This trio of talented females truly make beautiful music together. Kelly rocked a denim dress with a cinched belt on country’s biggest night. She paired her denim look with a pair of blue boots.

Ahead of the performance, Kelly posted a behind-the-scenes photo from rehearsal. “All ready for the #CMAawards! Let’s celebrate country music, y’all!” she wrote on Instagram.

Days before the CMAs, Kelly got some exciting news about her popular talk show. The Kelly Clarkson Show has been renewed through 2025 for two additional seasons. Kelly recently won Outstanding Entertainment Talk Show Host at the 2022 Daytime Emmys.

“Kelly Clarkson is one of the brightest stars of our time,” Tracie Wilson, Executive Vice President, Syndication Studios and E! News at NBCUniversal, said in a statement. “With more than 500 hours viewed on broadcast, cable and digital platforms since its launch, The Kelly Clarkson Show has been a home for stories that entertain, inspire important conversations and connect with loyal viewers across multiple generations in meaningful ways. Together, with our best-in-class producing team, we’ll continue to build on the show’s success and legacy.”

The singer will also be returning as a coach for The Voice season 23, which will premiere in 2023. She’ll join Niall Horan, Chance the Rapper, and Blake Shelton. Season 23 will mark Blake’s last season of the singing competition series. The NBC series is currently in the middle of its 22nd season.

The American Idol alum is working on her 10th studio album, which will also debut in the new year. “It’s coming out next year. And this is an important album,” Kelly told Variety. “I’m working on this in therapy: I have a hard time vocalizing what I’m feeling sometimes, so music is helpful for me. It’s just been really healing. I recorded the record quite some time ago.”

Kelly Clarkson’s Mom: Everything To Know About Jeanne Taylor