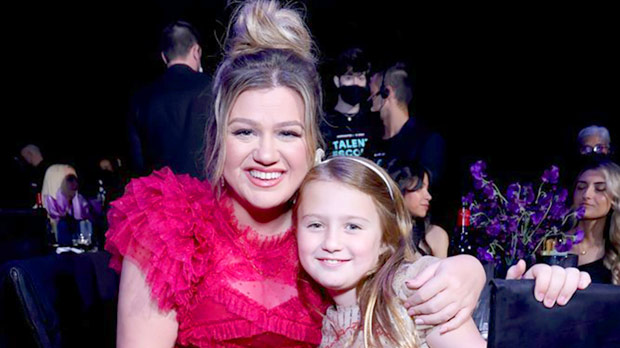 River Rose is a momma’s girl! Kelly Clarkson brought her 8-year-old daughter to the 2022 People’s Choice Awards for a fun night out. They sat side-by-side throughout the show and hugged after Kelly won Daytime Talk Show of 2022.

Kelly walked up to the stage and gushed, “I’m having a date night with my daughter, River Rose.” After giving a speech, Kelly admitted that she was “gonna go have ice cream with my baby girl.” You could hear River yelling “go mom” from the audience.

Kelly and ex Brandon Blackstock also have a 6-year-old son named Remington. The “Stronger” singer mentioned her son during her acceptance speech. “And Remy, I know you’re at home, you’re not feeling well. We love you, baby!” Kelly said.

The daytime talk show host looked gorgeous in a red ruffled dress. Her hair was pulled up in a messy top knot. River was dressed adorably for her night out, wearing a sparkly gold dress with coordinated tights and shoes. She also wore a cute headband as an accessory.

Kelly noted that this award is “really cool” for her “because this is where the people vote. And I feel like for the last 20 years, well, that’s my whole career has been people literally voting me in or getting something.” Kelly famously won the first season of American Idol with America’s vote.

The Grammy winner and Brandon split in June 2020 after 7 years of marriage. Their divorce was finalized the following year in August 2021 following a battle over assets. “Obviously, everybody knows a huge divorce went through and it’s been like two years and not easy with kids,” Kelly told PEOPLE back in June 2022.

Kelly Clarkson’s Mom: Everything To Know About Jeanne Taylor

Through the divorce settlement, Kelly has primary custody of River and Remington, according to TMZ. Brandon gets the children one weekend a month. He lives in Montana currently. He was granted $45,600 per month in child support along with $115,000 per month in spousal support.