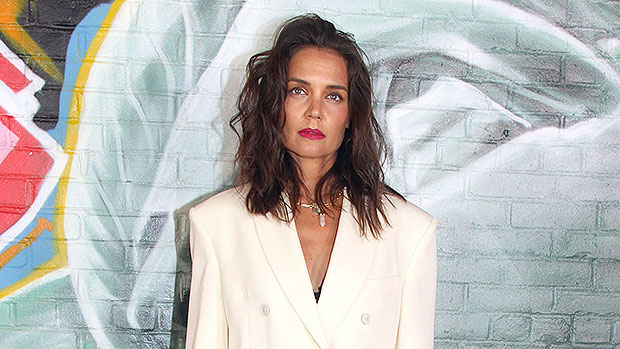 Katie Holmes’ name was on everyone’s lips after she was photographed kissing a new beau on Thursday, April 28. The Dawson’s Creek alum, 42, looked incredibly happy packing on the PDA with musician Bobby Wooten III, causing a commotion with fans who want to know more about this new romance! A source close to the actress EXCLUSIVELY gave HollywoodLife the 411 and said that Katie is “absolutely smitten” with the Broadway-performing bassist.

“Katie was not looking for this to happen and she has been happy living her life and focusing on raising Suri,” the source explained, referencing Katie’s 14-year-old daughter she shares with ex Tom Cruise. “So, when Bobby came into her life, she was apprehensive at first. But she agreed to go on a date with him because there was a mutual attraction and one date turned into two, which turned into three. And now here they are.”

The “Batman Begins” star was all smiles during her recent Big Apple outing with Bobby, where the new couple were snapped with their hands — and lips — all over each other. “She is absolutely smitten with Bobby,” the insider continued. “He is romantic and charming. Katie is allowing herself to feel these feelings and she knows that she is deserving of love. She is open to the possibility of having her happily ever after and although they are in the beginning stages of their romance, he gives her butterflies, which is all that any woman can hope for really.”

Katie Holmes: Photos Of The Actress

In the pics of the pair out and about in New York, one even shows Bobby giving Katie’s mom, Kathy Holmes, a big hug! According to the source, this is all par for the course. “He has met her family and her friends and has only left a good impression on all of them.” The insider added that Bobby has met her mom “multiple times” and said that “everyone who meets him adores him.”

The brewing romance is undoubtedly a welcome turn in Katie’s love life, as she hasn’t found the right one yet after her marriage to Tom ended in 2012. Following a low-key love affair with Oscar winner Jamie Foxx that ended after a few years in 2019, the Ohio-born beauty would go on to date chef Emilio Vitolo beginning in September of 2020. They eventually went their separate ways by May 2021.