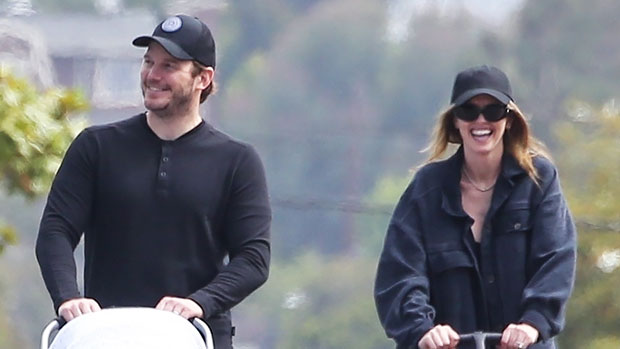 Chris Pratt and Katherine Schwarzenegger were all smiles as they took a walk with both of their daughters, Lyla, 1, and Eloise, 2 weeks, on June 5. It was the first time that the proud parents were photographed in public since Katherine gave birth to Eloise on May 21. Chris pushed Eloise, who was covered by a blanket, in her stroller, while Katherine helped guide Lyla on a tricycle. The family strolled around Santa Monica, with the proud parents wearing casual black outfits for the outing.

Chris confirmed Eloise’s birth with a touching Instagram post on May 22. “We are excited to announce the birth of our second daughter, Eloise Christina Schwarzenegger Pratt,” he wrote. “Mama and baby are doing well. We feel beyond blessed and grateful.” Meanwhile, Lyla will celebrate her second birthday this coming August.

After getting together in 2018, Chris and Katherine wasted no time taking their relationship to the next level. He popped the question just months later in Jan. 2019 and they were married that June. Lyla was added to the family just over a year after the wedding, and Chris and Katherine confirmed in Dec. 2021 that another baby was on the way. Now, Eloise makes them a family of four!

Chris Pratt’s Transformation: From ‘Parks And Rec’ To ‘Guardians Of The Galaxy’ And On

Of course, Chris also has a son, Jack, from his first marriage to Anna Faris. Jack, who turns 10 in August, is often seen spending time with his dad and stepmom, with Chris including him on family outings, as well as one-on-one father/son time. Chris and Anna got married in 2009 after meeting two years prior. They were together for eight years when they announced their separation in 2017. Anna is now married to cinematographer, Michael Barrett, but she and Chris remain on amicable terms as co-parents to Jack.

Arnold Schwarzenegger’s Children: Who Are They?