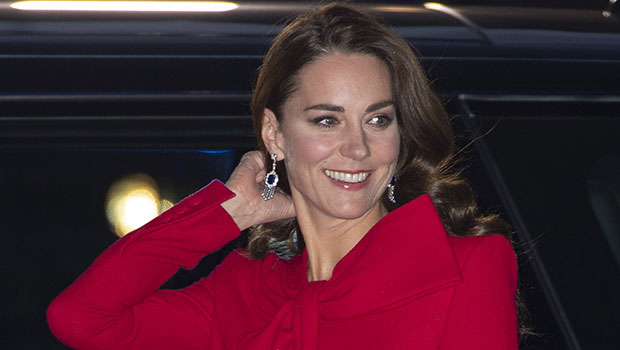 Kate Middleton’s milestone 40th birthday falls on Jan. 9! Just a day ahead of the big day, the Duchess of Cambridge looked more beautiful than ever in three stunning portraits.

Kate Middleton is just hours away from celebrating her milestone 40th birthday on Jan. 9. In advance of the momentous occasion, Kensington Palace released a trio of stunning new portraits taken by London’s Kew Gardens photographer Paolo Roversi. Kate looked more beautiful and regal than ever for the timeless images that will be housed as part of the permanent collection of the National Portrait Gallery.

In the first photo, which is in black-and-white, Kate wore a stunning off-the-shoulder white chiffon gown. She looked off to the side as her loosely curled hair blew slightly back, showing off her classic drop earrings with both pearls and diamonds. Her iconic sapphire engagement ring, made famous by her late mother-in-law Princess Diana, was prominently displayed on her left hand.

The next photo, published by PEOPLE, moved to color, capturing the rich color of her red satin gown. The one-shoulder, asymmetrical number featured a dramatic puffed sleeve and pockets, reminiscent of 1980s fashion. She added diamond earrings to the stunning ensemble, with her brown hair tousled into a relaxed curl and brushed to the side.

For the third image, Paolo captured the Duchess of Cambridge’s warm smile with an up-close portrait. Kate looked like she barely aged a day from her 20s in the youthful black-and-white image, which appeared to feature her wearing minimal makeup. She once again sported a white dress, this time going with a more bohemian themed piece adorned with a flower appliqué design.

Beyond being on display at London’s national gallery — which is set to re-open in 2023 — the three images are also set to be displayed in Berkshire, St. Andrews and Anglesey which are all places that Kate has a close connection to. Notably, she attended the University of St. Andrews in the early 2000s where she met her husband Prince William. Before that, Kate spent much of her childhood in Bucklebury, which her parents Carole and Michael Middleton still call home. And finally, Anglesey is where Kate and William moved after getting married back in 2011 as William trained in the Royal Air Force (they later moved back to London’s Kensington Palace in 2013).