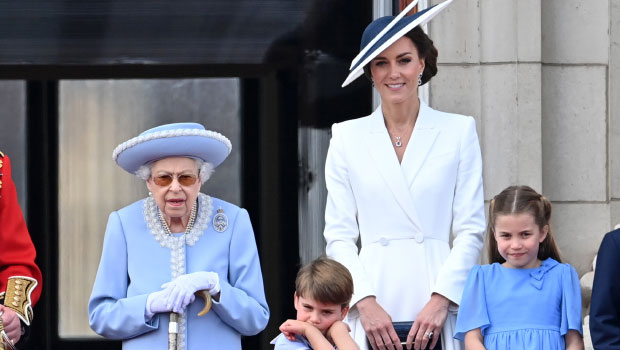 Kate Middleton, 40, spoke out about Queen Elizabeth II‘s health during one of her latest appearances. The Duchess of Cambridge admitted the 96-year-old royal had a “very tiring” first day of her big Jubilee celebration, which marks 70 years since she’s been on the throne of England, at a reception following a church service at St. Paul’s Cathedral, according to a report via The Northern Echo. “[Kate] said ‘yes, [the Queen] was fine, it was just very tiring yesterday, and [the Queen] had had a lovely, lovely time,’” a woman at the reception reportedly said after the Queen didn’t attend the second Jubilee event.

Kate’s reported comment comes after the Queen made headlines for releasing a gorgeous new portrait of herself for the Platinum Jubilee. In the portrait, she sat and posed in a light blue coat and skirt set that included white embroidered sections on the collar and down the middle of the coat. She smiled for the camera and looked poised and content.

In addition to celebrating her Jubilee this weekend, the Queen met her great granddaughter Lilibet, who is named after her, for the first time. Lilibet’s parents, Prince Harry and Meghan Markle are visiting England for the celebrations as family, which also includes their three-year-old son Archie, for the first time since moving to the United States in 2020. “Of course, we know the Queen went back to Windsor Castle yesterday, the couple went back to Windsor as well where they’re staying at Frogmore Cottage. So that would have been the first moment or the first chance for her to meet her namesake,” Omid Scobie said on BBC Breakfast on June 3.

It’s unclear if the reported meeting with Lilibet was before or after the Trooping of Colour event, which Harry and Meghan attended along with the Queen and other members of the royal family on Thursday. Either way, the baby girl turns one on June 4, so her royal great grandmother will most likely spend at least some of the special day with her.

The day started with Kate, her husband Prince William, and two of their three children, including Prince George and Princess Charlotte, making a visit to Wales. They were all photographed greeting onlookers outside and the girls were given flowers as they waved and smiled. The brood also posed for pics, looking great in their stylish coats and suits.