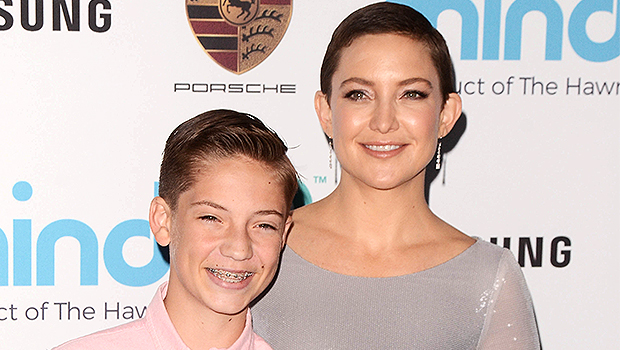 Kate Hudson is known for her health & wellness posts on social media & her son Ryder hilariously trolled her in a new video pretending to be her.

It’s no secret that Kate Hudson, 42, is a health and wellness aficionado, and the actress is constantly sharing healthy tips and tricks on her social media. However, when Kate was the special guest on Late Night with Seth Meyers on Sept. 14, the host played a hilarious video of her eldest son, Ryder, 17, trolling her. In the video, Ryder pretends to be his mom as he jokingly talks about a new smoothie he’s making while Kate stood right behind him shaking her head.

In the video, Ryder does a mock tutorial of a smoothie he’s going to make, pretending to be his mom. He said, “Hi guys, Kate Hudson here. I know you know me because you follow me, I’m so funny. Today we’re going to be making a goji berry in bloom protein shake – it’s delicious. I give it to my kids. They love it. My whole family loves it.”

Kate could not stop laughing as the video played and she told Seth, “There’s my little comedian. That’s fairly accurate.” She also went on to say, “He’s also deeply funny. Ryder – I mean, he’s clearly going to probably follow in the footsteps of family. and I would say he’s probably the funniest in our family.” Kate even went on to gush, “So, this is like every day for me. Nobody makes me laugh like Ryder, and he just constantly makes fun of me.”

Kate just got engaged to her boyfriend of four years, Danny Fujikawa, 35. She announced the proposal on her Instagram on Monday, Sept. 13, with a photo of the two kissing each other as she showed off her ring. She captioned the photo, “Let’s go,” with a bride, groom, and a church.