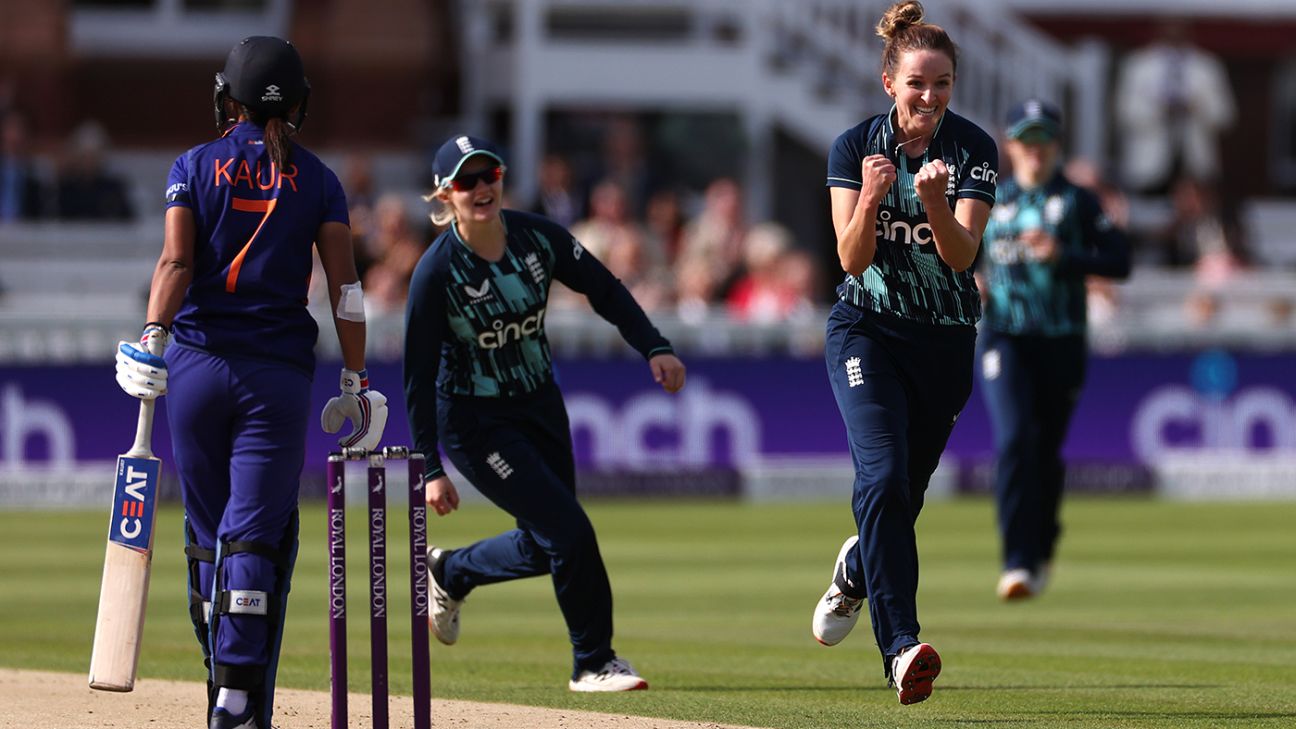 Kate Cross says England Women are ready to embrace a more aggressive approach under the guidance of new head coach Jon Lewis.
Upon linking up with his charges at their training base in Loughborough last week, Lewis revealed he wanted them to play less safe and “walk towards the danger” just as he had seen the England Men’s sides do across formats in his previous role as their elite pace bowling coach.

It’s an approach that may come naturally to the younger members of the squad, with the likes of Alice Capsey, Freya Kemp, Issy Wong and Lauren Bell all fearlessly grabbing the international opportunities given to them over the summer during the final months of Lisa Keightley’s three-year tenure as head coach.

And while Kate Cross, the 31-year-old seamer, believes it will require a “mindset shift” for the team as a whole, she’s all in.

“If you’re not willing to move with the times, then you’re going to get stuck behind anyway,” Cross said from Antigua, where the ODI squad is preparing for the first of three matches against West Indies on Sunday.

“I’m not daft, I know that people are going to work out how to face me and how to attack me and that’s ultimately going to put pressure on me. So if I can get ahead of that curve now, then that’s pretty handy for me as a player.

“How it looks for me might look very different to how it looks for Freya Kemp or Katherine Brunt. That’s where I think Lewy is going to come in and be really clear with our roles in the team, and what that looks like and what is needed from us.

“From a bowling point of view, we’ve got such a big unit now and a really exciting unit, that it will be more how we approach the game as a unit, because it’ll be up to the five or six bowlers that are out there to try and bowl teams out. It’s going to be interesting, but I’m really looking forward to it.”

Cross is an admirer of how England Men’s red- and white-ball teams have executed the positive ethos promoted by their respective head coaches, Brendon McCullum and Matthew Mott, reacting on her Instagram stories to an ECB post about the Test team’s feats on the opening day in Pakistan, saying: “Changing the game, this team”. And she said the concept wasn’t completely alien to the Women’s group, who had talked about adopting a similar approach under Keightley and captain Heather Knight over the summer.

“The thing that I’ve noticed with the youngsters is just the lack of fear that they have when they play. That’s probably an element of coming in and making debuts in the Hundred and playing in front of big crowds, and having the opportunity to impress people. Sometimes I think players from my generation could have been doing that, but it was a bit behind the scenes, you weren’t on TV, it wasn’t even live-streamed back then.

“Those youngsters are just used to that environment. For me, what is exciting is they don’t really care who’s bowling at them or who they’re bowling at, they just go and do their thing. That’s the making of a really exciting team.”

The ODIs in Antigua will form part of the ICC Women’s Championship, in which England are yet to get off the mark following their 3-0 defeat by India in September.

Cross is not part of the T20I squad staying on – with Brunt, Lauren Winfield-Hill, Sarah Glenn and Wong joining them – for five matches from December 11. She will return home along with Emma Lamb, Alice Davidson-Richards and Tammy Beaumont after the third ODI in a week’s time but for now she is relishing being back in the Caribbean, where she made her international debut in 2013 and where she came as a youngster herself to watch the men play on the 2004 Test tour.

“I remember coming out here as a young kid watching [Steve] Harmison and [Matthew] Hoggard bowling on pitches like this and making West Indian players look silly,” she said. “I also did see Brian Lara get 400, so maybe I shouldn’t say that. But I’m a huge cricket fan, I’ve been lucky to come out here and watch England men play, so it’s great to be back here… it’s a special place for me.”