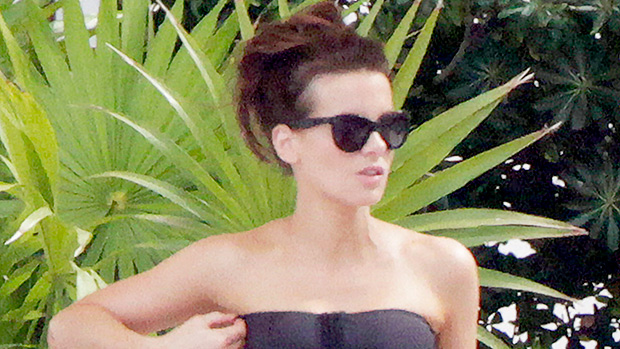 Kate Beckinsale is living the good life. On Aug. 1, Kate posted a new video of herself on Instagram, where she’s floating in her pool while wearing a strapless bikini. The black two-piece as white trim, and Kate showed off the look while lounging on a red float. She was joined by her cat in the summer sun, and wore sunglasses to block the rays. “He’s floating like a butterfly,” Kate captioned the bikini video.

On July 26, Kate celebrated her 49th birthday, and she’s clearly looking better than ever as she ages. In honor of her big day, Kate shared a photo of herself in front of balloons that emblazoned her name. She wore nothing but a pair of underwear and a crop top, along with knee-high leather books. Once again, she had her cat on full display as she held him in one hand for the shot.

Kate has never been afraid to strip down and share photos and videos of her sexy looks on social media. She is known for her cheeky commentary on Instagram, and never shies away from sarcasm and clap backs.

Kate was previously in a relationship with Michael Sheen, who she has one daughter, Lily, with, from 1995 until 2003. She was then married to Len Wiseman from 2004 until their split at the end of 2015. Earlier this year, Kate was briefly linked to Jason Momoa after he was photographed lending her his jacket following the Vanity Fair Oscars Party in March. However, Jason publicly denied any rumors of a romance, and insisted that he was just helping out a friend who was cold. He also revealed that their conversation centered around the United Kingdom, where she is from and where he had recently filmed a movie.