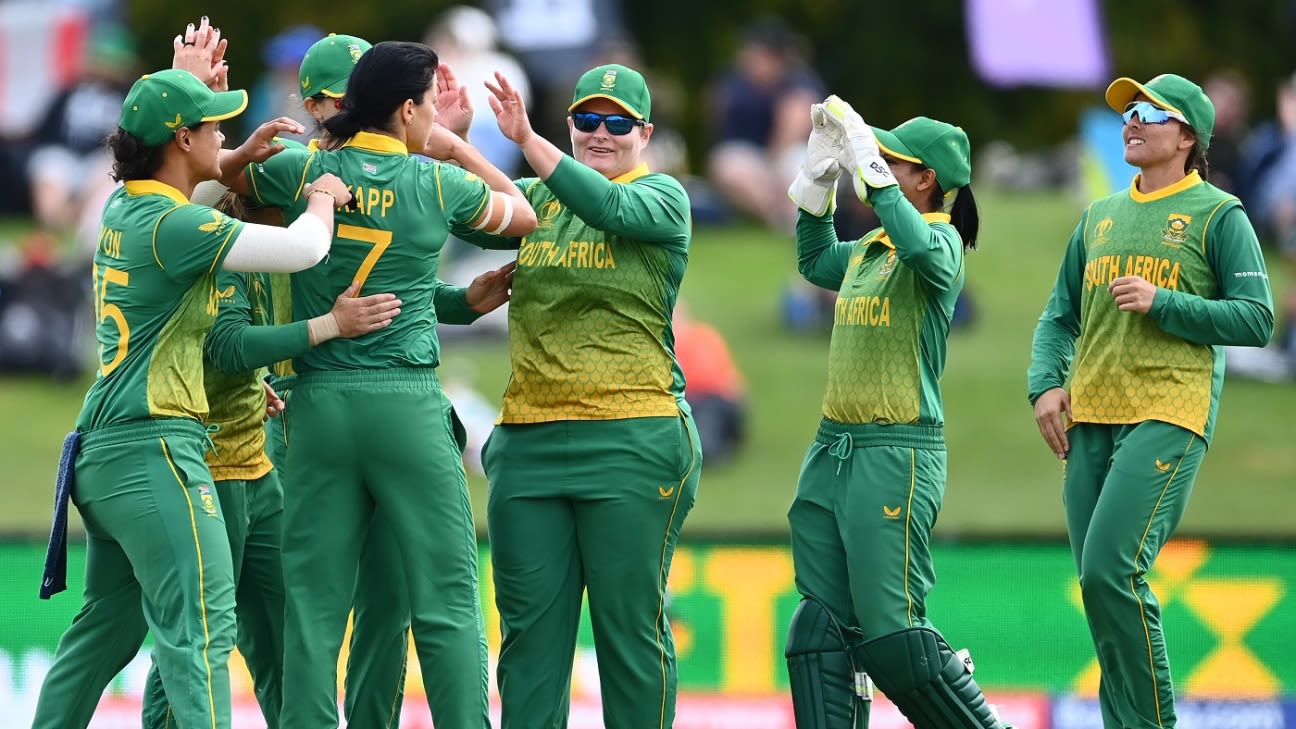 Marizanne Kapp, Lizelle Lee and Sinalo Jafta have all been included in South Africa women’s squad to play their first Test in more than seven years, against England later this month. The trio missed out on the white-ball tour to Ireland – Kapp after contracting Covid-19 for the fourth time – but have been named in both the Test and ODI squad for the England series. The T20 squad, along with the group for the Commonwealth Games, will be named next month.
South Africa last played a Test against India in Mysore in 2014 and four of the members of that XI – Kapp, Trisha Chetty, Lizelle Lee and Chloe Tryon – are in the current squad. Only one other current South African player has featured in a Test – Shabnim Ismail in 2007 against Netherlands – which means South Africa will field at least six debutants against England in Taunton. Chetty is the only player to have two Test caps.
Dane van Niekerk, the other current South African women’s player who has played a Test, remains unavailable for selection as she continues to recover from the ankle injury that has sidelined her since January. She has returned to training with the aim of being available for the T20Is and Commonwealth Games. Masabata Klaas, who injured her shoulder at the World Cup, is also unavailable. Tazmin Brits, Raisibe Ntozakhe, and Delmi Tucker, who are involved in the ongoing series against Ireland, will return home.

South Africa will play a red-ball warm-up match next week, in preparation for the Test.

“With the red ball, the main thing is to find our feet as a team again in the format and we take it one day at a time, then we can only progress into it and players can have an opportunity to go into a three-day prep,” coach Hilton Moreeng said. “Those that haven’t had the opportunity when we were back home can also start getting their aim of the red ball. Post that we know we are heading into ODI cricket and T20Is to build up into the Commonwealth Games.”
South Africa beat Ireland 2-1 in the T20I series and lead the one-day series, which is part of the ICC Women’s Championship, 2-nil. Their matches against England do not form part of the Women’s Championship (South Africa are due to host England for Women’s Championship matches) but are an opportunity to solidify their strategy as a squad.

“We are happy that we could come to Ireland and be able to play in these conditions which are similar to where we are going to. It has been very good and the exciting thing is that the crop of youngsters have started to put in the right performances. Now that we are going to England, we know that we are going to start with a format that most of them haven’t played in a while other than the preparation that we had, so it is exciting times, especially as a young cricketer in the squad,” Moreeng said.

“We are up against a very competitive team, a team that plays well in their conditions. It’s going to be tough as we go along but at the end of the day, we are excited with the group that we have and we now have an opportunity against the hosts to be able to win a series in England.”