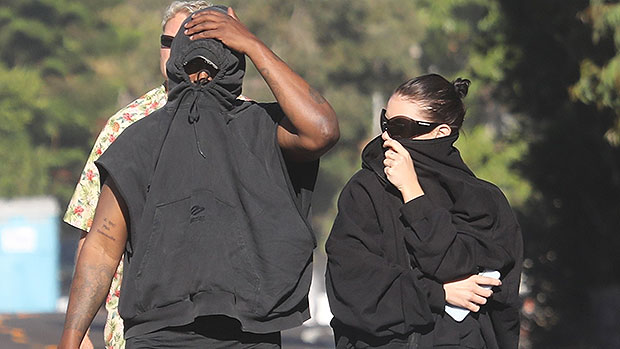 Kanye “Ye” West, may have more than just a house under construction. The rapper, 45, looks to be building a new relationship, too! He was seen in pics on Friday, August 12, with a hoodie cinched around his face, visiting the Malibu construction site of his sprawling new $57 million home. Alongside him for the visit was OnlyFans model Monica Corgan, 23, who was reportedly seen with him at a movie in June — just days ahead of his breakup with influencer Chaney Jones.

In photos, Kanye appeared to be dodging cameras, as he wore the sleeveless dark hoodie and matching shorts, along with a black ball cap and sneakers. His companion for the visit arrived alongside him wearing a heavy black jacket, which she covered her face with at one point. But later, Monica shed the jacket to reveal a sleeveless light blue bodysuit. She also donned sunglasses and took off her shoes to enjoy the warm California sun.

The sighting comes just days after Kanye’s ex-wife Kim Kardashian, 41, announced her split from Saturday Night Live alum Pete Davidson, 28. Kanye subsequently attacked Pete on social media with a fake newspaper cover reading “SKETE DAVIDSON DEAD AT AGE 28.” A source told us following the outrageous post, which has since been deleted, that Kim was “furious.”

“Kim demanded Kanye to take the post about Pete down,” a KarJenner source told HollywoodLife EXCLUSIVELY. “She can’t believe he would do something like that after promising her he would try to do better. The last thing she needs is more drama in her life, particularly coming from Kanye. She wishes he would leave the whole thing alone and she insisted he takes the post down. She’s furious at him right now and told him he better stop with his antics.”

This isn’t the first time Kanye has lashed out at Pete — their feud has become legendary, mostly due to Kanye’s aggressive attacks via social media, his songs, and in a particularly controversial music video. Kim had the divorce legally granted back in March, but details haven’t yet been finalized. The former power couple share children North, 9, Chicago, 4, Saint, 6, and Psalm, 3.