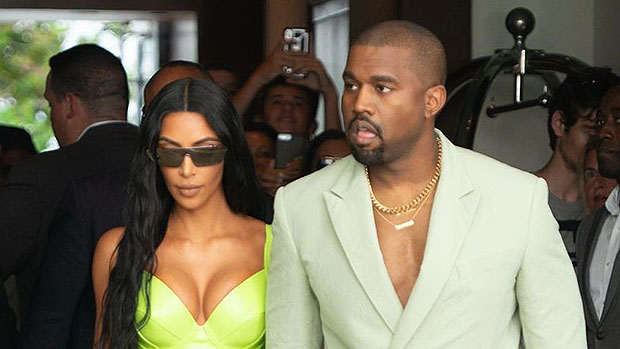 It’s rare for artists to get a Kanye West feature nowadays. However, for Future — the rapper Ye called “the most influential artist of the past ten years” – West made an exception, and joined him for “Keep It Burnin’” off of Future’s new album, I Never Liked You. The track seemingly referenced ex Kim Kardashian and his plans to run for the 2024 presidential election, following a failed 2020 attempt.

“When I run for ‘24, I know my spouse better be with me,” he rapped during the song, not calling out Kim by name. He also said earlier on in the track, “When you run for ’24, I bet your spouse gon’ be with you,” changing the pronoun. Kanye has made it clear on several occasions that he would like to rekindle his failed romance with the SKIMS founder, making several grand public gestures — including begging her to “run right back to me” during his December charity concert with Drake. It’s unclear, to note, when the song was recorded.

Future and Ye worked together once before, on “I Won,” a track from Future’s 2014 album, Honest. It cracked the Billboard Hot 100, peaking at No. 98, while reaching No. 17 on the Hot Rap Songs chart. The track was written about Ciara and Kim Kardashian, whom Ye and Future referred to as their “trophy wives, but in a complementary way. (“Ever since I got with you I feel like I done won me a trophy.”) The song painted a much better future of Future and Ciara’s relationship. Amid rumors that Future was unfaithful, the couple split in August 2014, four months after “I Won” was released as a single.

Coincidentally, Kim and Ye got married in May 2014. Seven years after dropping “I Won,” Kim filed for divorce from Kanye. The split has been a major influence on Ye’s recent work. If he’s not rapping about how he wants to “beat Pete Davidson’s ass,” he’s saying that the “family’s in danger” because “daddy’s not home.” He’s also taking shot about how Pete’s Saturday Night Live coworkers “don’t even like” him, or how he should “never stand between a man and his kids.”

“Me and Kanye always had a relationship,” Future said in his feature in the May 2022 issue of GQ. “But it’s hard for people to understand, because I don’t put everything on Instagram. Kanye flew me to Paris in 2011 or 2012 to work on music. [Discussing] his clothing line before it came, his shoe business before it came. People don’t know I’ve been able to go to his house, and pull up right into the crib. We just never talked about it.”

When appearing on Drink Champs in November 2021, Ye referred to Future as the “most important” and “the most influential” hip hop artist in the past ten years. “When he said that, I understood why he called me to Paris, even though I didn’t understand it at that time,” Future told GQ. “I understood why we had certain conversations. I understood him being a part of ‘I Won.’ Even him having me write on certain [Ye] albums that people don’t even understand I wrote on.”