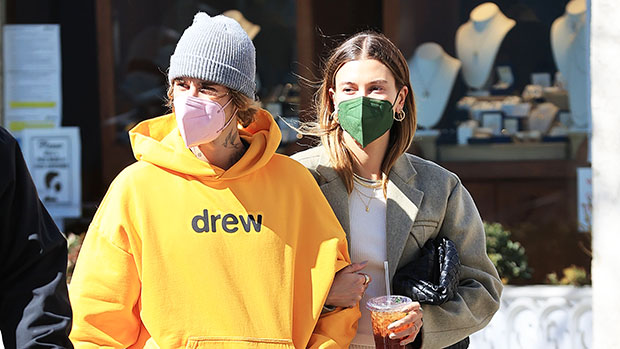 Sources tell HollywoodLife that Justin Bieber and Hailey Baldwin are in ‘good shape’ despite the video drama.

No drama here: Justin Bieber and Hailey Baldwin are in “good shape” after fans misinterpreted the context of a viral video of the two in Vegas over the weekend. A few days ago, a fan shared a clip of the boisterous “Peaches” singer, 27, after a show in the Wynn resort seemingly “yelling” at his wife, 24. Hailey issued a message shortly after that seemingly shut down the reports — and now, sources close to the couple have confirmed to HollywoodLife that everything is just peachy.

“Justin and Hailey are in love and they completely support each other in all that they do,” a source told HL exclusively. “They are in a typical relationship that just happens to have everyone’s eyeballs on them. That could easily cause stress, but they don’t let outside noise ruin what they have as a couple.” Adding that “there was no drama whatsoever,” the source added: “People shouldn’t have any worries about their relationship as it is completely in good shape.”

Hailey did not seem amused by the allegations of yelling. The model appeared to address the debacle on Instagram Story on July 14, penning a message about “negative bullshit” alongside a blurry pic of her kissing her husband from the trip. “Reminiscing on how amazing last weekend was,” Hailey wrote. “Had the best time surrounded by so much love. Any other narrative floating around is beyond false. Don’t feed into the negative bullshit peeps.”

In any case, the two had a “blast” in Sin City. The duo enjoyed the nightlife and gambled a bit on top of attending the UFC 264 fight. “Justin had a blast in Vegas and it felt incredible to put on that many shows in such a short time frame,” our source said. “He was surrounded by his closest friends, and of course having his wife Hailey there meant the world.”

Justice Dept. Proposes Rule to Crack Down on ‘Ghost Guns’

For a Defeated President, Pardons as an Expression of Grievance