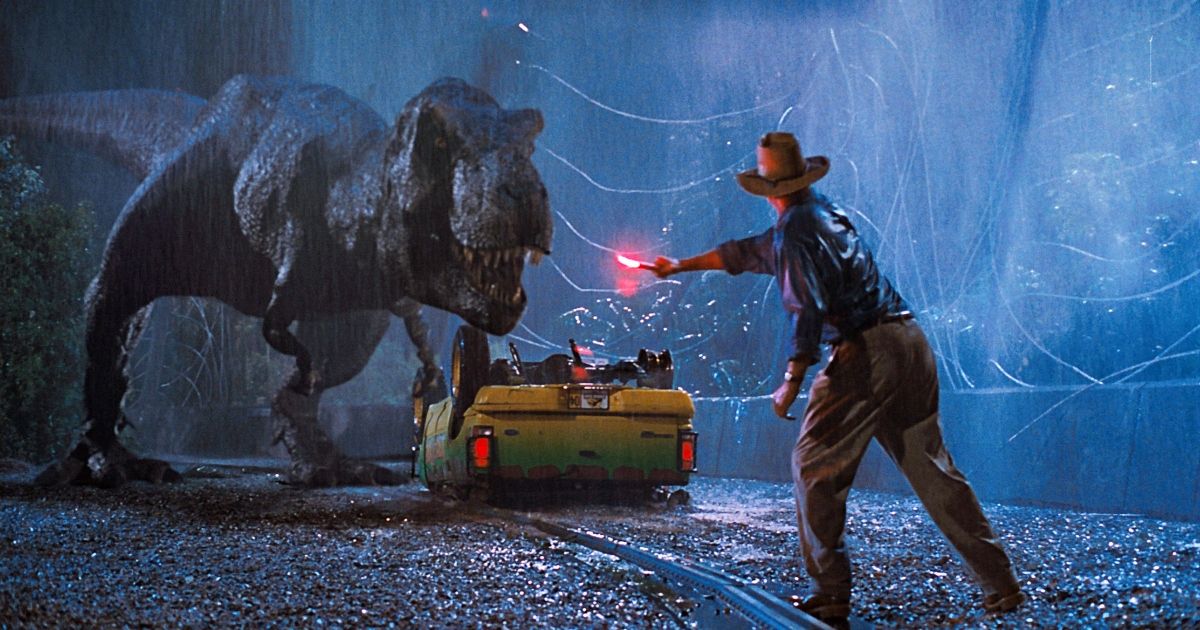 The Jurassic Park franchise as whole has made over $6 billion at the worldwide box office as of this year, but according to Jurassic World: Dominion director Colin Trevorrow the original movie probably shouldn’t have had any sequels that reworked the story of dinosaurs on an island. He however isn’t naïve enough to believe that the latest movie is really the end of the franchise.

When Jurassic Park was released, it took the main elements of Michael Crichton’s novel about genetic engineering gone wrong and created something the world had never seen before. Crichton also wrote the novel that formed the basis of The Lost World, which saw Jeff Goldblum’s Ian Malcolm journeying to second InGen island where dinosaurs roamed free. That movie was also the first time that we saw dinosaurs being thrown into the real world with a final act, when a T-Rex was let loose in San Diego in an extension of the novel’s ending, something that would foreshadow what would eventually come in Jurassic World: Dominion.

While Colin Trevorrow believes that the latest movie brings the story around to something other than focusing on just dinosaurs, but did admit that perhaps the other movies shouldn’t have necessarily been made. He told Empire:

“I specifically did something different than the other films in order to change the DNA of the franchise. The previous five films are plots about dinosaurs. This one is a story about characters in a world in which they coexist with dinosaurs. For the franchise to be able to move forward – because it’s inherently unfranchisable, there probably should have only been one Jurassic Park – but if we’re gonna do it, how can I allow them to tell stories in a world in which dinosaurs exist, as opposed to, here’s another reason why we’re going to an island?”

Related: Bryce Dallas Howard Says Chris Pratt Fought for Pay Equity on Jurassic World: I Made ‘So Much Less’

Like many of the Jurassic Park sequels, critics were particularly harsh towards Jurassic World: Dominion, with the film being the worst rated of the entire franchise. However, that couldn’t stop it being one of the highest grossing movies of the year and making it only second movie since the Covid pandemic began to cross the $1 billion mark.

When it comes down to it, there were three things that audiences wanted to see in Jurassic World: Dominion. That was dinosaurs let loose in the real world and legacy cast members in prominent roles, which is what Colin Trevorrow’s movie delivered in heaps. While the film also included plenty of cliché moments, some clunky dialogue and a number of fan service scenes, it was all part of the fun for those willing to just enjoy the ride. From the tale of the tape, it appears that there were lot of cinemagoers who were quite happy to do just that.

As Trevorrow said, it is very unlikely that the Jurassic Park franchise will end there, as if there is one thing guaranteed to bring in an audience in huge numbers it is movie about dinosaurs. As he concluded, “For me I think it might have been clearer if they’d said, ‘The end of an era’, as opposed to all of it. Because regardless of the cynical approach – of course they’re gonna want to make more money, which is what Jurassic World was about.”