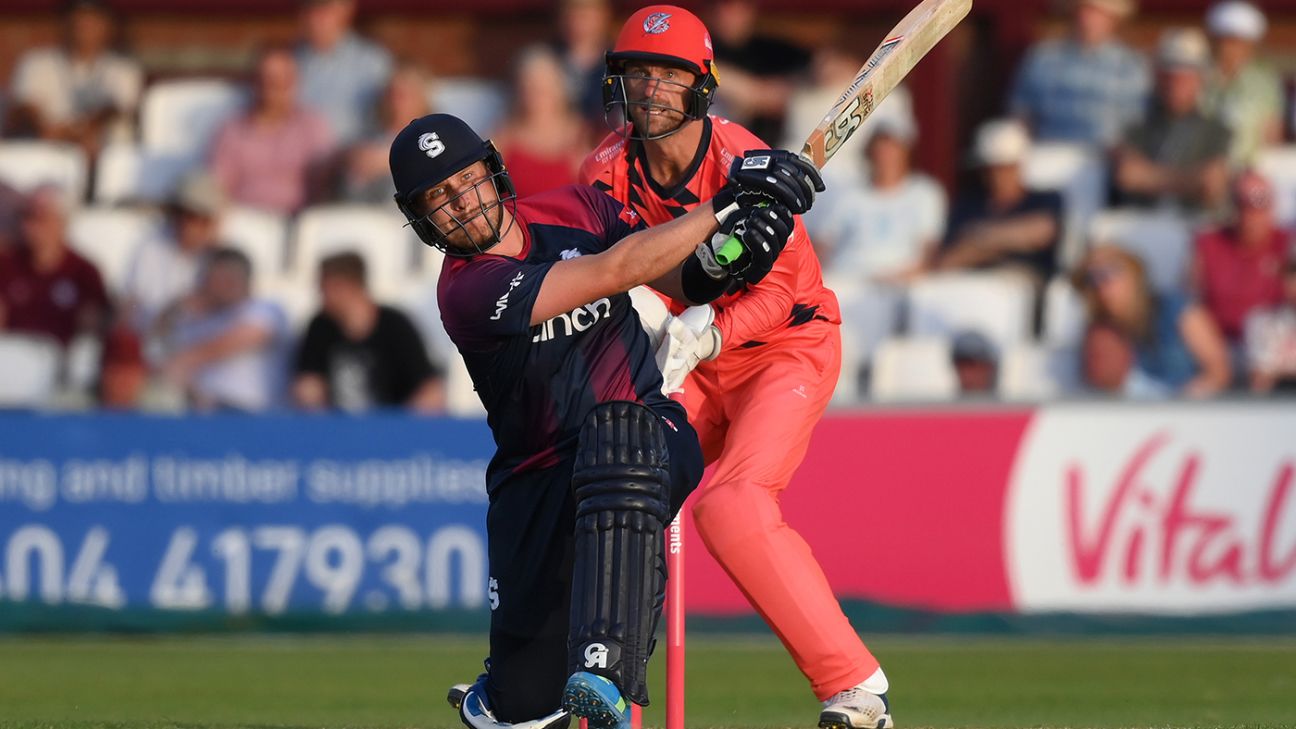 Josh Cobb led from the front as Northamptonshire made light of missing Chris Lynn through injury to thrash group leaders Lancashire by seven wickets at Wantage Road.

Lynn was ruled with a calf strain, but Cobb, dropped on nought, filled the void with plenty of cricketing pyrotechnics, his 57 off 32 balls including three sixes as the hosts chased down a target of 154 with 22 balls to spare.

Ben Curran provided great support with 50 of his own against a Lancashire side without their own big-hitting talisman Liam Livingstone, away on England duty.

The visitors clearly missed him as despite skipper Dane Villas’s 38 and an explosive 31 off 10 balls from Tim David they could only muster 153 for 7. Graeme White and Ben Sanderson both returned 2 for 28, while Tom Taylor took 1 for 21.

Lancashire opted to bat, but on a slightly two-paced pitch they struggled for fluency, losing openers Josh Bohannon and Keaton Jennings inside five overs.

Villas provided much needed momentum, sweeping White for six before hitting Freddie Heldreich back over his head for another maximum as he dominated a 50-stand with Steven Croft

White extracted revenge when he forced Villas to hole out at mid-on, but that brought Lancashire’s leading run-scorer in the competition David to the crease.

He quickly made his mark hitting Heldreich for four successive sixes, the first two endangering the commentary box before he twice hit inside out over cover, the young spinner gaining recompense for the bruising when Croft lofted him to White in the deep from the final ball of the over.

David was then dropped at deep square by Saif Zaib, only to be caught next ball, White the successful bowler, and after he departed Lancashire mustered just two boundaries in the remainder of their innings.

Emilio Gay (30), making his first appearance at the top of the order in T20, took two early fours off Croft, before evading a beamer from Richard Gleeson for which the seamer was warned. By the time the left-hander drilled Danny Lamb to David at mid-on, the Steelbacks were already ahead of the rate.

Curran took up the mantle with three fours off another Gleeson over, before David’s eventful night continued as he reprieved Cobb on nought, failing to lay a hand on a mishit which went for four.

Cobb set about making the most of the let off, belting Luke Wells into the crowd before clattering a short one from Gleeson onto the top of the burger stall beneath the main scoreboard as the 100 came up inside 10 overs.

Cobb was missed again on 40, Tom Hartley grassing the chance at backward point, and he made the errant fielder pay, slapping him for a flat, straight six. He moved to 50 soon afterwards from 28 balls before being caught in the deep off Matt Parkinson.

Curran’s own 50 came from 13 balls more and though he fell on the brink of victory, the Steelbacks coasted home for a statement win.