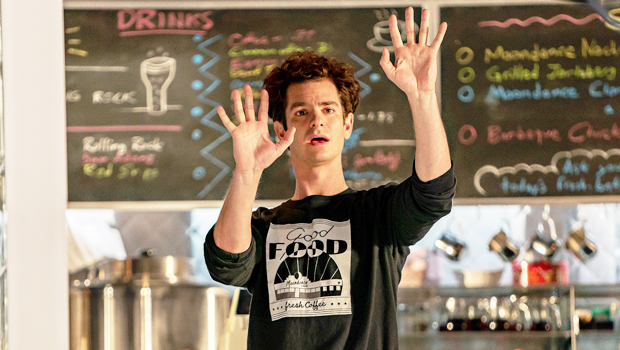 Andrew Garfield stars as the Jonathan Larson in ‘tick, tick… BOOM!’ Here are 5 key things to know about the brilliant playwright who wrote ‘Rent.’

Jonathan’s life came to a tragic end when he was 35 and on the cusp of his big break. From his death to his connection to Stephen Sondheim, HollywoodLife has rounded up the key things to know about Jonathan.

Jonathan was found dead in his kitchen on January 25, 1996, at the age of 35, according to The New York Times. He died of a dissecting aortic aneurysm. An autopsy revealed that Jonathan had “more than foot-long tear inside his aorta, the main artery carrying blood from the heart to all other organs, that was caused by a congenital weakness in the blood vessel.”

It’s believed that Jonathan had been suffering from undiagnosed Marfan syndrome, a genetic condition that can damage the heart. Jonathan had been complaining of chest pains and even went to the hospital twice before his tragic death. The doctors did not diagnose his condition and sent him home.

The Netflix film, directed by Lin-Manuel Miranda, is based on the semi-autobiographical musical that Jonathan wrote before Rent. Lin-Manuel saw Rent as a teenager, and the show inspired Lin-Manuel’s own In The Heights. He ended up seeing a production of tick, tick… BOOM! in college. “It felt like a private message in a bottle from Jonathan, that said ‘This is harder than you think it’s going to be, but it’s worth it if you really love it.’ It was scary and incredibly clarifying for me,” the director told The Hindu.

4. He was a waiter while writing his musicals.

Jonathan wrote a fan letter to Sondheim while he was in college and Sonheim responded. Sondheim would write recommendation letters for Jonathan and send them to producers. At one point, the famed playwright left Jonathan a voice message on his answering machine and told the young writer that he had a promising career ahead.