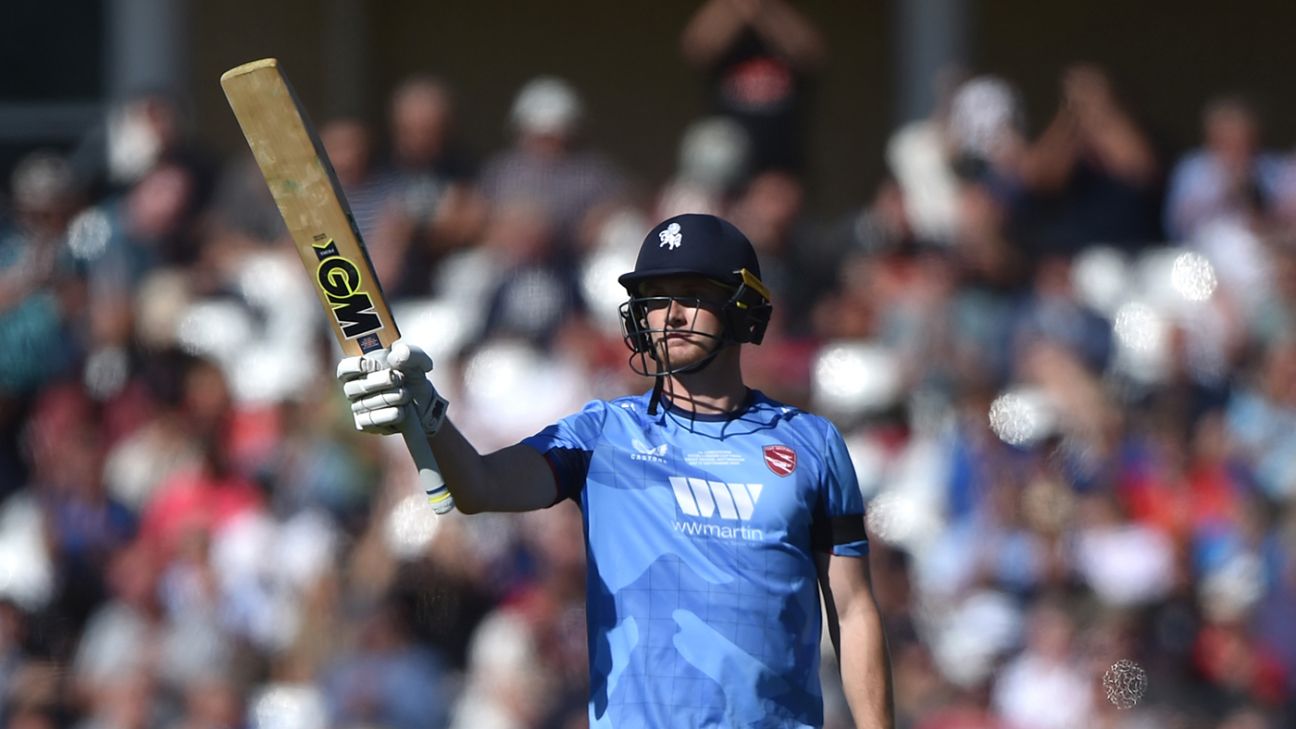 Kent claimed a 21-run victory in the final of the Royal London Cup as Joey Evison made a triumphant return to Trent Bridge only weeks after turning his back on the county.

Evison, who was loaned out to Kent by Nottinghamshire for the Royal London Cup ahead of a three-year deal, followed up a composed innings of 97 with an outfield catch at a crucial period and a yorker to finish it in a nerveless penultimate over to stymie Lancashire’s pursuit of 307.

Peter Moores, Nottinghamshire’s coach, was frustrated by Evison’s departure, but the advent of The Hundred, and the current status of the 50-over tournament as a developmental competition has created conditions in which talented young players are more ambitious than ever to quicken their careers.

In the frantic closing overs, two alternative paragraphs were vying to be written – and they both involved Derbyshire being well beaten in a List A final. The relevant one turned out to be Kent’s first List A triumph since 1978, a prosaic, low-scoring affair even for those times in which Derbyshire made only 147 – four wickets for John Shepherd – and Bob Woolmer’s sedate 79 completed a six-wicket win.

Crucially, Kent’s outfielding was vastly superior to Lancashire’s in the second half of their innings with Alex Blake, Evison and Nathan Gilchrist all holding sharp catches, a contrast to some slipshod moments in the field that left regular Lancashire observers aghast. Evison was denied the best catch of all, a one-handed affair off Grant Stewart to dismiss Liam Hurt for nought, but the ball brushed the ground and further tension ensued before Evison yorked Hurt eight balls from the end and Kent could claim victory.

T20 Finals Day has long usurped the 50-over final as county cricket’s one-day jamboree, but more than 9,000 turned out to watch the culmination of a diminished competition which at least was back in its rightful place in early September as the Championship also reaches its climax.

Thirteen players involved in The Hundred were absent. Kent omitted their septet as a deliberate show of faith to those who had taken them to the final. Lancashire had no such compunction, but lost three to England, Liam Livingstone to injury and omitted their spinners Matt Parkinson and Tom Hartley.

Keaton Jennings batted with such comfort that a match-defining innings appeared to be on the cards, but he fell for 71 (64) in the softest manner as he patted the legspinner Hamidullah Qadri to short extra and stood motionless in disbelief for several seconds.

Jennings has led Lancashire ably over 50 overs this summer. It is nearly four years since he played the last of his 17 Tests, but 30 or not he is a capable cricketer and responsive leader and there would be far worse choices as a back-up opener in Pakistan.

At 126 for 3 in the 22nd over, and 181 more needed at 6.3 an over, the match was keenly balanced, and Lancashire lost a second batter of equable temperament in pressure situations when Dane Vilas dragged on trying to pull Evison. Fourteen overs passed without a boundary as Evison and Qadri took control.

Steven Croft then broke free, taking four boundaries off successive overs from Evison and Qadri to sweep past his 50. It appeared that, after all, the story would be about a veteran player anxious for a new contract, however it would not be about the man who had attracted all the headlines, Darren Stevens, but Croft, a mere stripling at 37. But the match swung again as Croft hauled Gilchrist to mid on; George Lavelle, aiming for deep midwicket, picked out the diving Evison; and Gilchrist held another thrilling diving catch at deep backward square to remove Rob Jones.

Lancashire’s bowling attack had been short on options compared to Kent’s with sixth-bowler duties left to Croft, a redoubtable professional over many seasons, but someone who had bowled only 15 overs of offspin in the competition and whose staccato round-arm delivery suggested a prescription of beneficial stretches might be in order.

Kent had lost a wicket after four balls and the identity of the batter determined the nature of their progress. It was Ben Compton, an opener of prudence, who steered a wide delivery from Tom Bailey to backward point, leaving Ollie Robinson to fulsomely carry the fight. Robinson’s future at Kent will not be determined until the end of the season – as well as this cup final he might well be drafted into a relegation scrap – with Durham prominent among his suitors. He took a liking to Will Williams, unafraid to loft him over mid-off, but he was silenced on 43 when the wicketkeeper Lavelle held an excellent, one-handed diving catch off an inside edge. His 534 runs at 66.75 is a runs tally outdone only by Stephen Eskinazi and Cheteshwar Pujara. The player of the tournament, though, went to Leicestershire’s South African Wiaan Mulder.

Evison played with great discernment for his 97, most of his 14 fours and one six struck down the ground – a favourite area – and his one uncertain moment coming on 47 when Lancashire’s review for an lbw verdict for Liam Hurt narrowly failed.

As Moores doubtless gnashed his teeth in anticipation of an Evison century, he was dismissed three runs short, courtesy perhaps of some well-judged Lancashire professionalism. Lancashire’s review for a glove down the leg side off Danny Lamb was predictably overturned when replays showed the ball had brushed Evison’s hip, but as the seconds ticked by Lancashire had time to grab a drink and regroup and Evison had more time for reflection than was good for him. Lamb’s next ball, a slower inswinger, rattled into middle stump as he missed it by a distance. Joe Denly‘s 78 from 69 balls carried Kent through the middle overs, freed from an uncertain start by some canny forays down the pitch.

There was to be no flamboyant finale for Stevens, whose memorable match-winning exploits, at 46, had carried Kent into the final and won him many headlines. “Stevo is God” proclaimed a Flag of St George banner in the Fox Road stand, but as much as Godlike status at Kent is not to be sniffed at, he hankers more after a player-coach deal wherever he can get one. He managed only eight overs of his spell before leaving the field with a damaged groin.

His unbeaten 32 from 31 had been a bit of a mercy because his touch largely escaped him. He was twice the beneficiary as Lancashire’s fielding fell apart in the final hour. His first cloth down the ground was fumbled by Luke Wells at long on; Jennings drop of a skier to cover was much more culpable. He was also the guilty party in the run out of Stewart, eager to regain the strike after Stewart pushed the ball straight to Croft at point. A flawed legend on this occasion then, but a legend all the same.