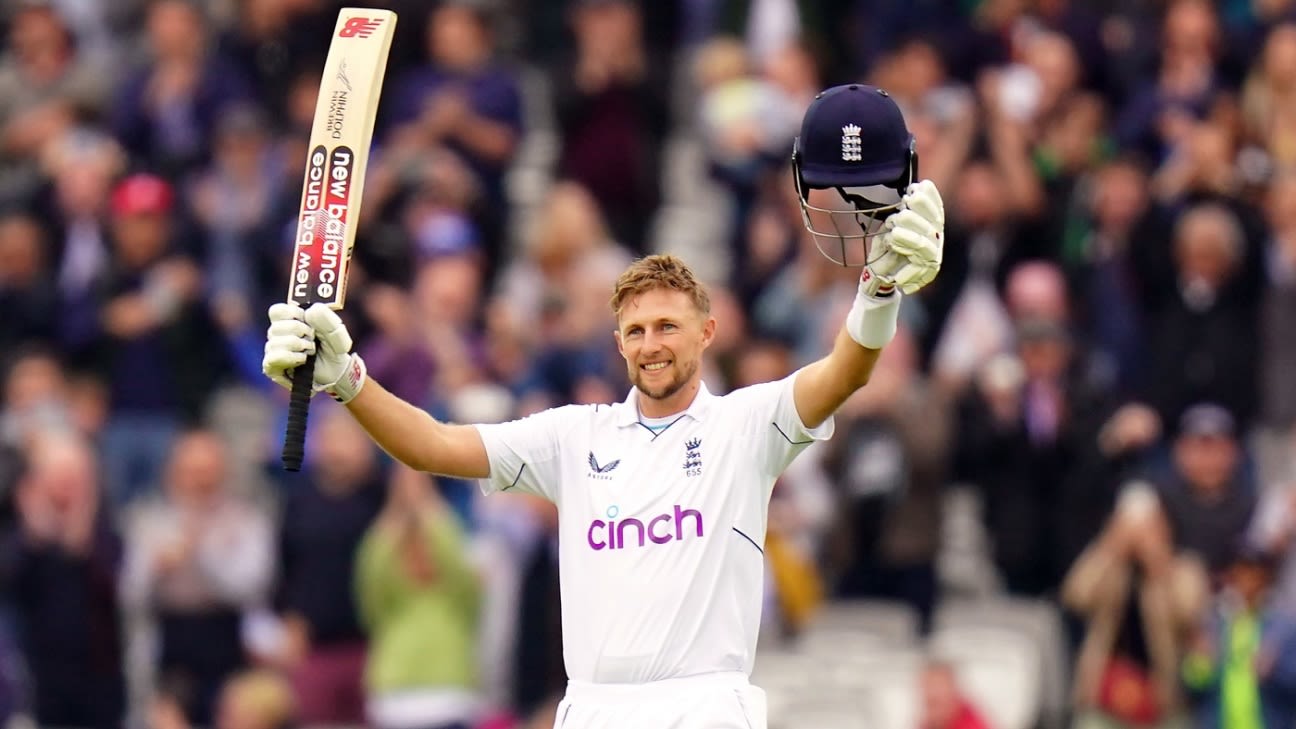 After three madcap days to begin England’s new era of Test cricket under Ben Stokes and Brendon McCullum, there was an air of serenity around their march to victory on the fourth morning at Lord’s. Joe Root provided the quality and the clarity to cut through the gloom, bringing up his hundred and 10,000 runs in Test cricket with the same shot, as New Zealand’s challenge – which had seemed sunk the moment they were 45 for 7 on day one – finally fell away.
Root’s century, remarkably his first in the fourth innings of a Test, formed the bulwark of a chase of 277 that had been in trouble at 69 for 4 but became increasingly comfortable as the former captain took control following Stokes’ fortune-favoured fifty on the third evening. He was ably supported by Ben Foakes during an unbroken century stand that never gave New Zealand a sniff; Foakes finished on 32 not out, having played his most important innings since a century on debut during a Man of the Series performance in Sri Lanka four years ago.

That the result remained in the balance, after England had reached 59 without loss in reply to New Zealand’s first-innings 132, was testament to the fighting qualities shown by Kane Williamson’s side. Having limited England to a nine-run lead, they had the look of favourites after the 195-run stand between Daryl Mitchell and Tom Blundell – but Stuart Broad inspired another turnaround and the game continued to ebb and flow until Root’s decisive contribution.

He finished the job himself with three fours in an over from Tim Southee, walking off to a standing ovation, as well as handshakes from the opposition. This was his 26th Test hundred, his third of the year already, and his first back in the ranks. Life under the new regime hasn’t changed a jot for Root.

Despite a murky morning greeting those arriving at Lord’s, it was soon clear that New Zealand had their work cut out for them. The juice that contributed to 23 wickets falling across the first four sessions of the Test had long since dissipated, and they began the day with a ball that was 65 overs old. Root shuffled down to Southee’s first delivery, pushing hard but settling for one after flicking off his pads, as England looked to start positively.

The prospect of the second new ball coming around an hour into the day encouraged the venturesome approach. After Stokes’ frenetic counter shifted the balance on the third afternoon, Root had ticked up almost imperceptibly through the gears – from 34 off 89 at the point when England lost their fifth wicket, he scored at exactly a run a ball to finish on 115 from 170.

There was greater intent about Foakes, too. Kyle Jamieson, who threatened to decide the contest single-handedly on Saturday, returned to the attack in the third over, having shifted back around to the Nursery End. His second ball was driven confidently back through mid-on by Foakes, only a diving stop from Southee preventing four, and the wicketkeeper further settled England nerves a couple of overs later by threading the first boundary of the morning through backward point.

Jamieson was punched for straight fours by both batters, as Root moved into the 90s. A chop past his stumps off Southee moved him within sight, before a clip through midwicket two overs later brought him a comfortable two and a loud rendition of “Rooooooooooot!” from around the ground. His ninth hundred since the start of 2021 continued a purple run of batting, as he became the 14th man overall to 10,000 in Tests, and the second Englishman after Alastair Cook.

By that point, any tension about England’s ability to knock off the runs had eased. Williamson gamely made several attempts to get the ball changed, but the breakthrough that would have given New Zealand a crack at the home side’s lengthy tail was not forthcoming, and the winning runs came inside 14 overs – Root’s beneficence extending to a full refund for the crowd – and before the weather could close in to delay the inevitable, putting England 1-0 up in the three-match series.

Defeat for New Zealand was their first against England in Tests since the 2015 result on the same ground – a match that was significant for Stokes as a player in a way that he will hope this one is for his captaincy. It also ended a run of nine Tests without a victory for England, as the Stokes-McCullum axis hit the ground running; even if it was more of a stroll for Root.