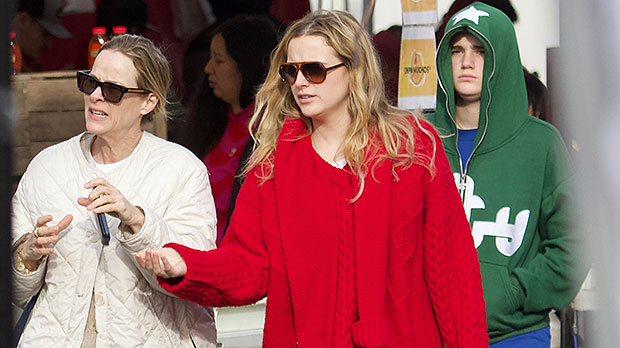 Two of President Joe Biden‘s grandchildren spent some time at a farmer’s market in Washington D.C. recently and looked quite stylish! Maisy Biden, 22, and Finnegan Biden, 23, were photographed browsing the area among other visitors and looked content as they searched for food and other goodies. They were also joined by their mom, Kathleen Buhle, 53, who used to be married to Joe’s son Hunter Biden.

Finnegan appeared a comfortable-looking red sweater with another red sleeve around her neck as the sleeves hung down. She also wore light blue ripped jeans and had her long blonde hair down as she carried a leopard print purse. Maisy appeared to wear a green hoodie with light blue shorts, and Kathleen wore a white jacket over a white top and jeans.

Their outing comes at the same time as Joe’s first visit to the Southern U.S.-Mexico border. He arrived on Sunday as the administration deals with a growing number of migrants, overwhelming federal and local resources, according to CNN. A White House official said he “will meet with federal, state, and local officials and community leaders who have been critical partners in managing the new migration challenge impacting the entire Western Hemisphere with record numbers of people fleeing political oppression and gang violence in Venezuela, Nicaragua, Haiti, and Cuba.”

The president will also “evaluate border enforcement operations, touring the Bridge of the Americas Port of Entry alongside Customs and Border Protection officers, members of Congress and local officials and law enforcement,” CNN further reported.