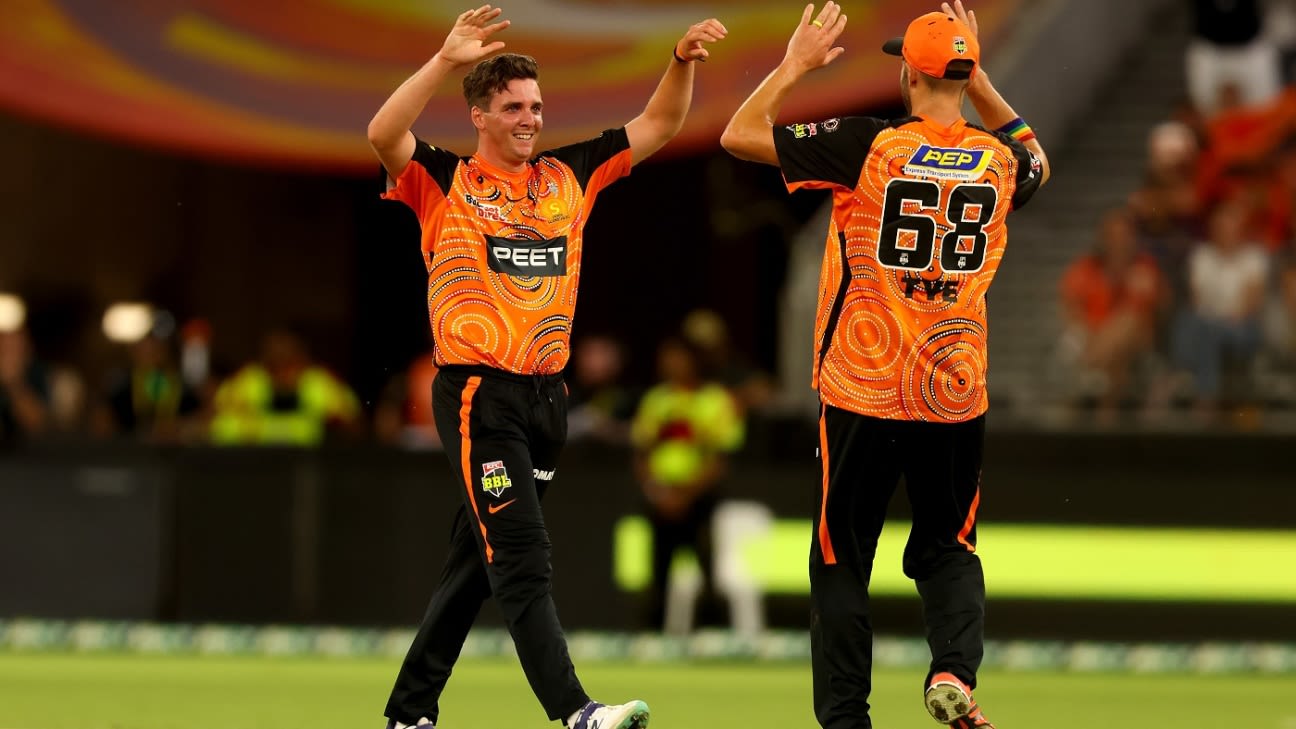 Perth Scorchers fast bowler Jhye Richardson has been ruled out for two to three weeks with a hamstring strain but coach Adam Voges is hopeful he could be back for the BBL finals if Scorchers qualify.

Scans on Thursday confirmed he had suffered only a minor strain but Scorchers are likely to be cautious with him given his soft-tissue injury issues in the past two seasons.

“It’s on the very minor end of hamstring strains, two to three weeks,” Voges said on Friday. “We’re certainly hopeful that we’ll see him before the end of the tournament again.

“I think you need to [be cautious], certainly with someone of Jhye’s calibre. But we’ve got a world-class medical staff here. And I’ll trust them to put the work in with Jhye over the next two weeks. And hopefully, we’ll see him back and we’ll get him back on the park as soon as possible.”

Richardson has already had an interrupted summer. He was carefully managed by Western Australia prior to the BBL; he only played two of the first six Sheffield Shield matches of the summer battling a variety of niggles including a bruised heel.

Scorchers have received a boost with Lance Morris being released from Australia’s Test squad to return to the BBL. Morris and Marcus Harris flew out of Sydney on Friday to play in the BBL for their respective teams. Harris has flown to Melbourne to link up with Renegades ahead of Saturday’s clash with Hobart Hurricanes at Marvel Stadium. Peter Handscomb has left Renegades to join the Australia squad in Sydney as a replacement for Harris if Australia’s Test side needs a concussion substitute or a substitute fielder for the remainder of the Sydney Test.

Morris has flown to Perth and is a chance to play for Scorchers in Saturday’s clash with Brisbane Heat at Perth Stadium.

“We’ll see how he pulls up,” Voges said. “He’s done a heap of work, obviously, preparing for Test match cricket. I know he’s had a white ball in his hand over in Sydney in the last couple of days, starting to prepare to come back to us. So we’ll see how he pulls up from his plane trip today. There’s every opportunity for him tomorrow.”

“He [Payne] arrived just in the new year,” Voges said. “He’s settled in really well. He’s had a couple of training sessions with us. And we’ll have another hit out today. Quality left-arm seamer, who can swing the ball. And if he gets his opportunity tomorrow, I’m sure he’ll do a really good job.”

Scorchers also have to replace Faf du Plessis at the top of the order against Heat after the South African batter has left to play in the SA20 league which starts next week. Englishman Adam Lyth will play against Heat but is also set leave after that to head to the ILT20 in the UAE. Middlesex batter Stephen Eskinazi has joined Scorchers as an overseas replacement.