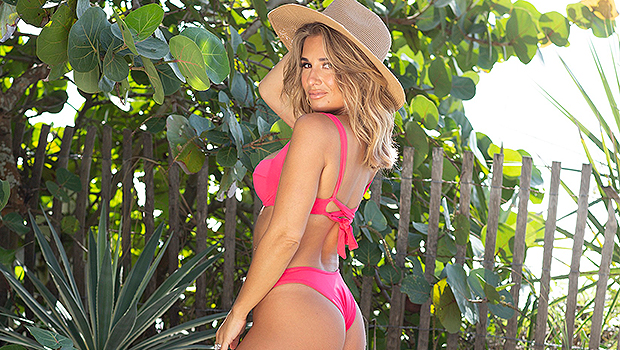 Jessie James Decker didn’t hold back while on a “#baecation” with several girlfriends in Cabo San Lucas, sharing numerous sexy shots to her Instagram feed. In the first photo, the country pop star wore a blue bikini with pink borders and other colors, putting her amazing bod on display as she stood confidently atop a swing. Jessie posed with her left leg popped, holding a plastic cup of beer in her right hand while looking off into the Mexico sun, also sporting a cute, straw sun hat and sunglasses.

“Cabo just brings it out of me, ” the 33-year-old wrote in the caption, celebrating the fun moment while vacationing with the girls.

The “Should Have Known Better” singer posted another skimpy bikini moment earlier in her feed, showing off her impressive derriere in the process. In that photo, Jessie posed with her backside facing the camera as she looked out to the beautiful oceanside, pointing her fingers out in peace signs and taking in the sunshine.

The mother-of-three again displayed her stunning figure with a black thong string bikini, pairing the look with a beige sun hat and pulling her sun-kissed locks back in a ponytail. “Suns out [sic]…” she wrote in the caption, trailing off to imply the other — shall we say cheeky — part of the expression, aka “buns out!”

The cute, confident photos come after the “Flip My Hair” singer went through a rough period after people on the internet body-shamed her on Reddit. The songstress revealed she was left in tears over the online remarks, sharing an emotional video on her Instagram stories. “They’re talking about, apparently, how fat I’ve gotten, and how boxy and how terrible my body looks,” she said, per PEOPLE. “It’s pretty awful, and I just can’t believe this is still happening in the world, like that people are doing this.”

Jessie continued by calling the Reddit thread “disgusting,” reminding her fans that she’s “a human being” and the body-shaming comments “hurt” her. “It doesn’t feel good to be picked on or bullied or ripped apart. I hope my daughter doesn’t grow up in a world where people do this to her, because it’s wrong, and I think we all need to do better,” she added.