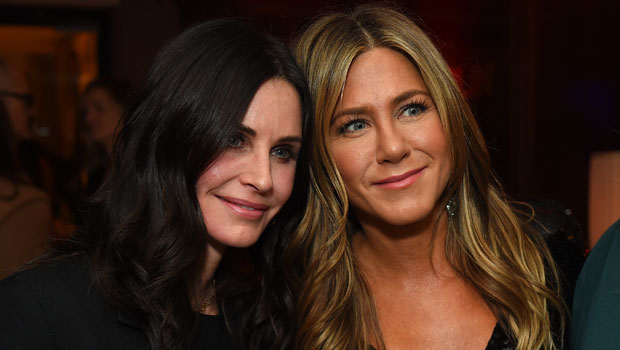 Jennifer Aniston sent birthday love to her best friend Courteney Cox on her 57th birthday, and the tribute is so adorable.

Courteney Cox, 57, received a lot of love from her friends and family for her birthday on June 15, including Courteney’s Friends co-star and real-life best friend, Jennifer Aniston, 52. Not surprisingly, Jen went all out when she wished her long-time girlfriend a happy birthday, taking to Instagram to post a special tribute for the birthday girl.

The first piece of media posted to Jen’s Instagram stories was an old video with 50 Cent’s “In Da Club” playing in the background. The two besties could also be seen holding hands as they walked outside of Stage 24 on the Warner Bros. Studio lot, where their hit show, Friends, was filmed. Jennifer added the caption, “Happy Birthday to this ridiculously special human @courteneycoxofficial. Time flies when you’re having fun!”

Jen’s second story was a more current picture of the two besties, and it featured Courteney’s beloved dogs Harley and Hopper. “Who loves ya baby!” Jennifer added, clearly reminding her best friend that she is loved and cherished by absolutely everyone.

For those who may not know, Jen and Courteney first met on the set of their hit ‘90s show, Friends, during which they played best friends and roommates, Rachel Green and Monica Geller. Jen and Courteney have remained extremely close since the show ended in 2004, with Courtney even naming Jen as her daughter’s godmother. Coco Arquette,17, who is the daughter of Courteney and actor David Arquette, 49, recently turned 17 on June 13, and Jen couldn’t help but post an adorable throwback picture of the two on her Instagram stories.

In that pic, Jennifer could be seen holding a blonde-haired, young Coco in her arms, with their hair blowing in their faces from some intense wind. They both had huge smiles on their faces as they embraced one another for the absolutely adorable photograph.

In May 2021, Jen and Courteney reunited onscreen for a special Friends reunion episode alongside their co-stars, Lisa Kudrow, Matt LeBlanc, Matthew Perry, and David Schwimmer.