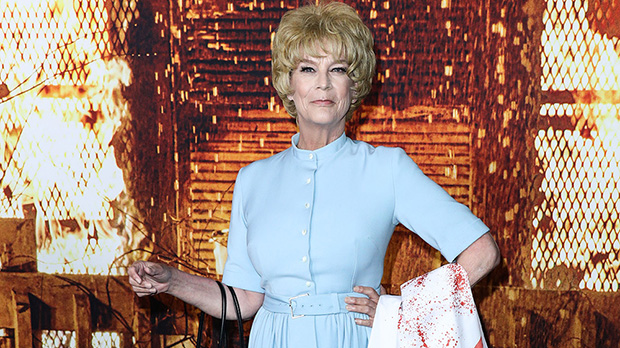 While attending the premiere of her new movie, ‘Halloween Kills,’ Jamie Lee Curtis honored her famous mother, Janet Leigh, and the actress’ most notorious role in the 1960 thriller ‘Psycho.’

Jamie Lee Curtis paid tribute to her late mother, Janet Leigh, with her look at the Halloween Kills premiere. The 62-year-old dressed up as Marion Crane from Psycho for the red carpet event, which took place on Oct. 12. Marion Crane was Janet’s best-known role, and Jamie Lee fit the part perfectly. She wore a light blue dress and carried a shower curtain with blood smattered across the front. She also rocked a blonde wig in Marion’s signature style, and looked just like her famous mom as she posed for photos.

On the red carpet, the actress described the inspiration behind her look. “It’s a little more meta than [just honoring my mom],” she told Entertainment Tonight. “I am actually going in as Scarlett Johansson in as Janet Leigh in the movie Hitchcock. So it’s meta because we never knew what color Janet Leigh’s dress was because it was a black and white movie. But now because of the Hitchcock movie, we know it was pale blue.”

Jamie Lee said that she added the bloody shower curtain to her look so fans wouldn’t think she just “looked like a ’50s housewife” in her ensemble. The Halloween Kills premiere was costume-themed, so all of the attendees showed up in various different out-there looks. Other celebs in attendance included Kyle Richards, who’s also in the movie, along with her Real Housewives of Beverly Hills co-stars, Dorit Kemsley, Lisa Rinna and sister Kathy Hilton.

Halloween Kills is the follow-up movie to 2018’s Halloween, which picked up 40 years after the original Halloween film. Filming of the horror movie was delayed a year due to coronavirus, but the film will finally hit theaters on Oct. 15. Another sequel, Halloween Ends, is scheduled to premiere in 2022, and is said to be the final in the new trilogy. Jamie Lee is set to reprise her role as Laurie Strode in Halloween Ends, as well.