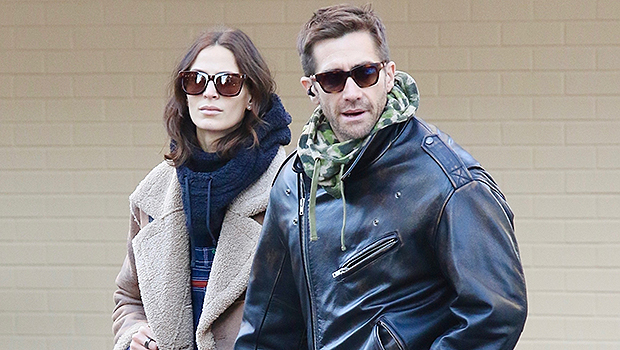 Jake Gyllenhaal, 41, and his girlfriend Jeanne Cadieu, 26, were caught by photographers holding hands during a rare public outing ahead of the Thanksgiving holiday! In pics, the Nightcrawler star looked bundled up and content wearing a stylish black leather jacket with asymmetrical zippers and a camo hoodie underneath. He wore jeans and accessorized with sunglasses and white sneakers as he made his way through Manhattan’s trendy SoHo neighborhood with Jeanne on Wednesday, November 23.

His model girlfriend matched Jake’s casual vibe with a long, brown leather coat, and what appeared to be denim overalls folded at the cuffs. She also carried a brown purse and accessorized with sunglasses, brown shoes, and a cozy looking navy blue hoodie. Jeanne wore her hair down and rocked minimal makeup for the shopping trip in the downtown area, just one day before Thanksgiving.

Though Jake and Jeanne are rarely seen together in public, they first began sparking romance rumors back in 2018, so they’re not a new item. They finally made their red-carpet debut at the premiere of The Lost Daughter in September 2021. And last year, when shock jock Howard Stern broached the topic, the Zodiac actor seemed to indicate the relationship is serious. “All I want is to be a good husband and a father…That really is what I want,” Jake told Howard in October 2021, per E! News. “And now that I have fulfilled a lot of things in my career that I feel comfortable with, I can safely say that. I don’t know if I could have said that before.”

Going even further just months later, he called the gorgeous model “family”  and gushed over her “support.” “In a lot of ways, we’re family,” Jake told Esquire magazine in February. “I’m in a relationship that is full of love and support. I feel so at ease.”

A source close to the couple told us in 2021 that although they’ve flown under the radar, the duo makes a “darling couple.” “Jake has made it a point to keep his relationship with Jeanne out of the media spotlight,” the insider told HollywoodLife EXCLUSIVELY. “Before Jeanne, Jake hadn’t really had a serious relationship in quite some time but Jeanne makes him happy and they have amazing chemistry.”

Who Is ‘All Too Well’ About? Everything To Know About Taylor Swift’s Most Famous Breakup Song