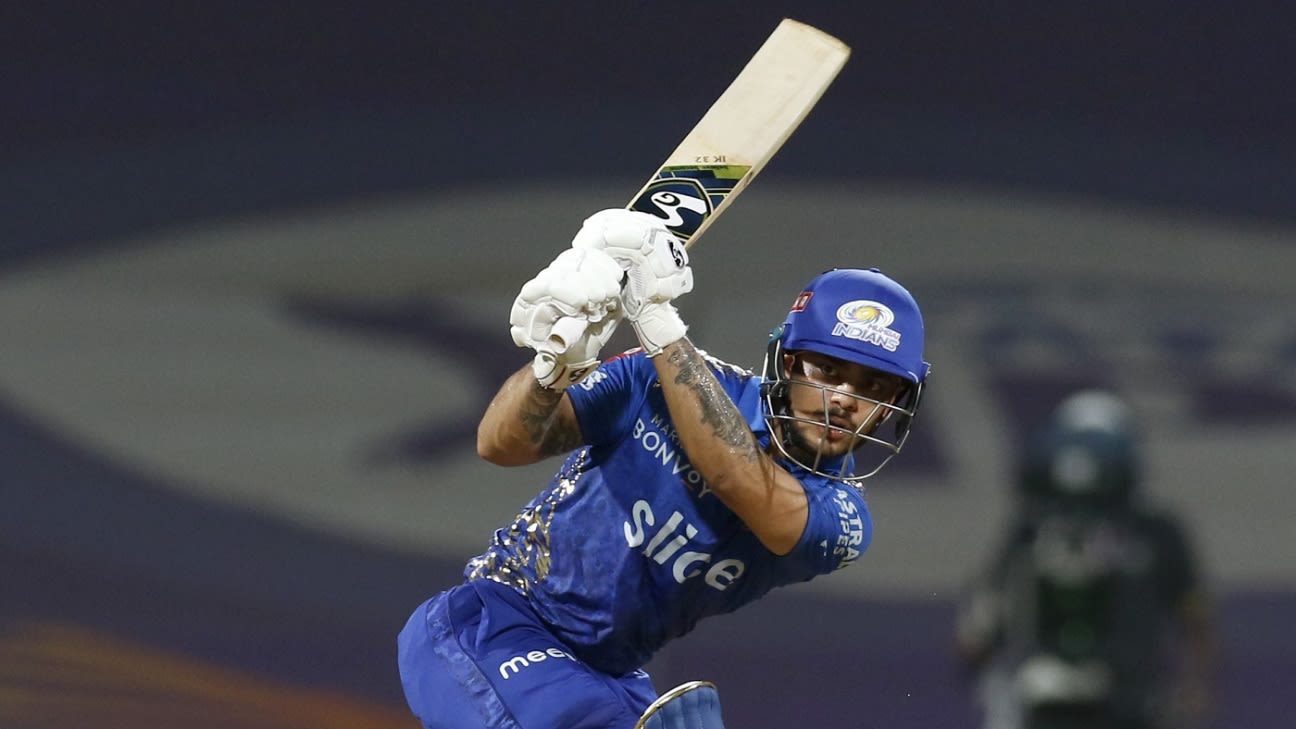 Ishan Kishan admits having “lost focus” in trying to deviate from being an early enforcer to a finisher. Having gotten into a rut, he’s trying to revert to his original style that has brought him T20 success.

Currently, his strike rate of 117.15 is the fourth lowest among batters who have faced at least 150 balls in IPL 2022. There has been some improvement though over the past three games, with Kishan contributing scores of 51, 45 and 26. Kishan’s struggles have mirrored Mumbai’s struggles.

“What worked well for me was, initially when I started the tournament, I wasn’t over-thinking, I was just going and batting, like I used to do,” Kishan said. “My focus was on giving a good start to the team. But I think later, somewhere I was trying to finish the game and do the job for others who were supposed to do it, and maybe I lost my focus in the first six overs.

“I had a chat with the coach and captain also, and they just said, ‘If you can give us a good start, it will be helpful for the team, so you don’t have to think about finishing the game. If you are set there in the middle, you will anyway do that.’ So right now, my focus is just on giving good starts and making sure that I don’t get out easily. And if I’m the set batsman in the middle, I’m making sure that I have to be there to finish the game.”

Much of Kishan’s focus lately has been inwards. Known to be a prankster around the team, he hasn’t let the fun element dry out. He insists key lifestyle changes and an improved focus towards diet and fitness have helped him make wholesome changes that he hopes will pay off going forward.

“During the earlier seasons, I didn’t follow diet plans and stuff a lot, but now I’m following it,” he said. “I’ve seen a lot of senior players around me do that. I’ve also had chats with trainers as to how the body helps you with your cricket, something I hadn’t realised until now. Like, while wicketkeeping, my movements are still good because a lot of it is liked to diet and how you train and form your routines.

“In the IPL, matches keep coming, sometimes you tend to miss the training bit outside of the game. But now I have a proper plan in place that I’ve formed in discussion with the trainers. And we’re following it to ensure fitness is maintained and we feel good at the same time. Most of the guys who are in the Indian team are also following the same plan.

“Players feel quite nice about it. In a bubble, we’re only looking at how we can utilise the time. The body is used to the bubble life now. We’ve got all the facilities given to us by the Mumbai management – gym, trainers – three of them who are always behind us. So, we’re focused on how to keep the body in best shape and how we can perform at our best.”

“I don’t get affected by the comments people make, and I don’t think anyone else does either. People will talk. If you have fans, you’ll have haters too”

Ishan Kishan on dealing with pressure

Kishan’s lack of form has invariably been linked to IPL auction pressure. He was the season’s costliest signing at INR 15.25 crore. He admits while it did play on his mind early on, he has moved on and chats with senior players around the subject have helped bring clarity.

“Price tag pressure lasts for a certain time,” he said. “Maybe on auction day, or maybe a day or two after that. But at the level you’re playing and having played for a while, I know what is most important. Do I keep that pressure on your mind or do I focus on how you can win matches for the team? Obviously, price tag pressure will be there for a while but if you have good seniors around you, if a player around you feels that way, a lot of seniors are around you.

“Rohit, Virat, Hardik – all of them said the same thing. ‘Don’t be worried about the price tag pressure, it’s not something you have asked for. Instead of thinking about that, think of cricket and be in your zone. That is important.’ It’s possible they would’ve also faced such a situation before. How have they handled it then? These are things I’ve spoken about.

“I feel very light now, I don’t even think about it. Price tag is secondary. The focus – whether you’ve been sold for 1 crore, base price or 15 crores – what matters is how you make the team win. Or if you’re not in form, how you’re helping others bring out their best. The focus has been on that.”

“Rohit, Virat, Hardik – all of them said the same thing. ‘Don’t be worried about the price tag pressure’•BCCI

Has he been affected by the external noise and chatter about his form, auction price? Not at all, if Kishan is to be believed.

“I don’t really check who is saying what,” he said. “I know that they aren’t in our situation. If I was sitting on the outside, maybe I would have also written a lot of things about everyone. It’s the easiest thing to pick your phone and type away.

“I saw some players, new to the team, who were checking the comment sections after the match. I told them, ‘There’s nothing to be gained by reading this. Those people aren’t playing, and they don’t know what pressure we have gone through.’ It’s easy for them to write that there should have been a six hit, they might want 36 runs in six balls. But cricket isn’t so easy.

“What the situation is in the middle, what the team requires at that time… every player likes to play shots, but sometimes you will see several big-hitting players also playing on the merit of each ball, for 25 balls. Because that is a situation where you need a partnership.

“It’s easy for the public to write. But yes, there are some fans who know what you’re going through also and who will back you. If you see on social media, or get to see through your manager, you’ll see you get backing also in your down time.

“But I don’t get affected by the other comments people make, and I don’t think anyone else does either. People will talk. If you have fans, you’ll have haters too. They’re getting fun while writing, it’s okay. It doesn’t affect us, and we don’t even see those messages.”

Shastri: Kohli needs a break ‘not because of form’

Kohli open to taking a break to ‘rejuvenate’ himself mentally