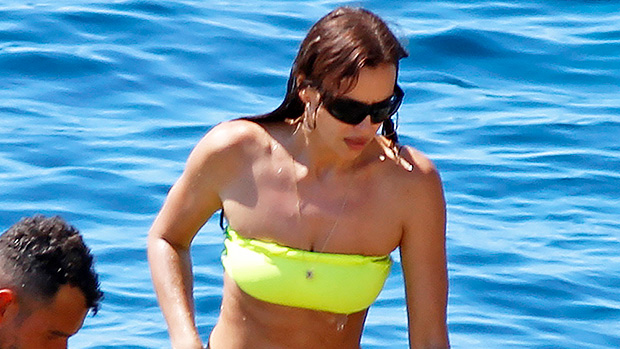 Irina Shayk looked every inch the Sports Illustrated Swimsuit Issue vet during her summer getaway to Ibiza. The Russian supermodel was spotted enjoying the sun-soaked Spanish island locale in a neon yellow bikini on Friday, August 5. Rocking a set of designer sunglasses, Irina took a dip in the crystal blue waters before heading off to lounge on the sandy beach.

The seaside jaunt comes only a few days after Irina took to her Instagram to share a gorgeous video of herself sporting a hot pink bikini as she splashed around in a stunning hotel pool. The mother of one — who shares 3-year-old daughter  Lea with ex Bradley Cooper — looked incredible floating on her back in the calm water, as she captioned the clip, “Isla Bonita.”

It’s nice to see Irina getting some rest and relaxation after the model had some serious topics on her mind when her homeland invaded Ukraine. In March, she made it clear she was supporting Ukraine, as she pledged financial aid to UNICEF and Red Cross Ukraine. “No To War,” she wrote alongside an image of a peace symbol. “I will be donating to @unicef and @redcrossukraine – Please check my stories for donation links and resources, give what you can. Praying for peace.”

And she isn’t the only Eastern European model to speak out on the crisis. Milla Jovovich got emotional in her social media post reacting to the news, as she has ties to both countries. Taking to her Instagram, the former model and Resident Evil franchise alum said she is “heartbroken and dumbstruck” by the tragic events, which have hit close to home. “My country and people being bombed. Friends and family in hiding. My blood and my roots come from both Russia and Ukraine. I am torn in two as I watch the horror unfolding,” she wrote.

Irina was born in Yemanzhelinsk, Russia in 1986 when it was still known as the Soviet Union. She received international recognition in 2011 as the first Russian model to land the cover of the Sports Illustrated Swimsuit Issue. Since then, she has become a household name as a model, actress and the ex of Bradley. The pair welcomed Lea together in 2017.