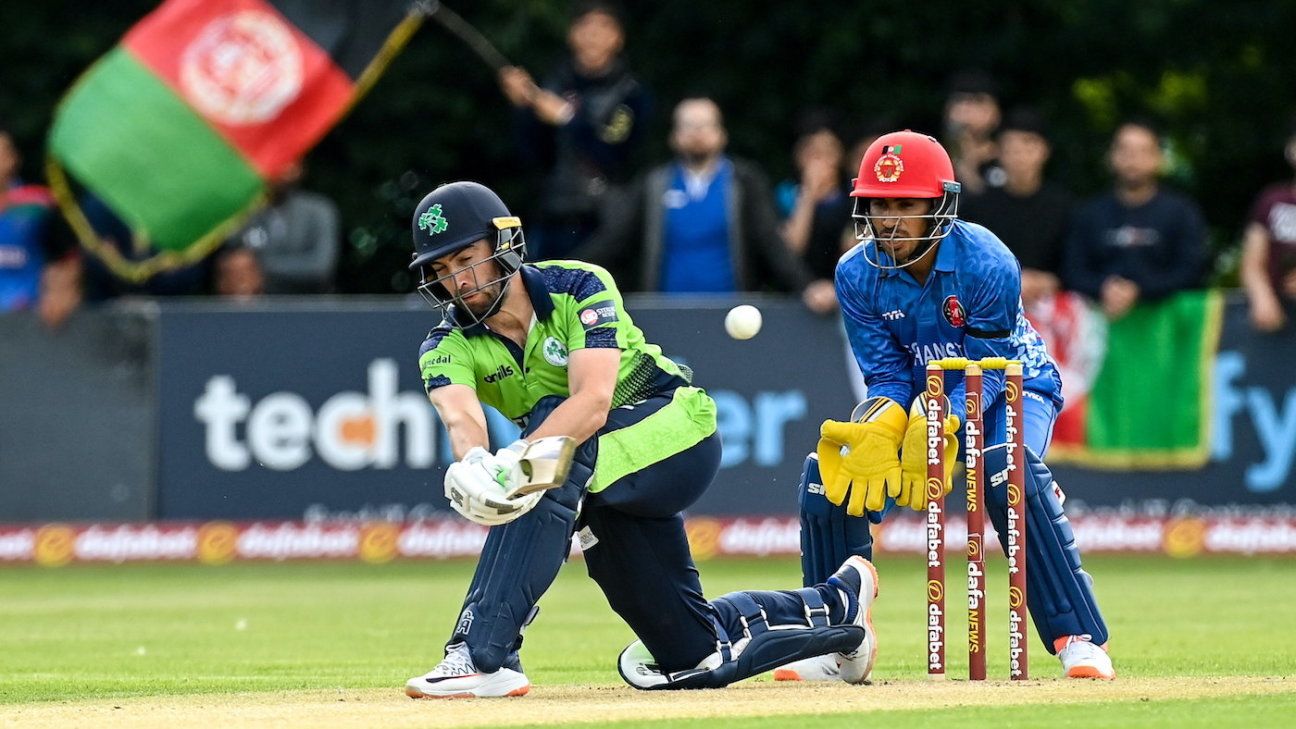 After losing in seven T20Is and three ODIs and not managing to register a win all summer – despite coming close on more than one occasion – Ireland finally managed a W in their column. In what turned out to be a nail-biting finish, George Dockrell and Harry Tector kept their cool as Ireland beat Afghanistan by seven wickets in the first T20I in Belfast. It was, however, a chase that the hosts almost fluffed up.

Needing 48 runs off six overs with nine wickets in hand, chasing 169, Ireland seemed to be in the driver’s seat, but a couple of tight overs gave Afghanistan a sniff again. With 13 needed off the last over, Dockrell, though, held his nerve and slammed Naveen-ul-Haq for two successive fours to give Ireland the win with one ball to spare.

That Afghanistan have played only five T20Is in 2022 prior to the game, and no international cricket since June 14, clearly showed as they struggled to find the timing on a slightly two-paced Belfast surface. However, Usman Ghani’s fourth T20I half-century backed up by a quick 18-ball 29* in the death overs from Ibrahim Zadran, did manage to propel the visitors to 168 for 7.

Andy Balbirnie‘s welcome return to form, followed by Lorcan Tucker‘s second fifty in his last three T20I innings, then kept Ireland coasting through. However, what seemed like a straightforward chase for the majority of the stretch changed course with Balbirnie and Tucker falling in quick succession. But, Tector and Dockrell brought out the big hits just in time to take Ireland over the line.

Ghani to the rescue

Having scored just eight runs off seven balls in the first five overs of the powerplay, Ghani knew he needed to get a move on. With Rahmanullah Gurbaz gone in the fifth over, Ghani soon opened up his shoulders. He struck fast bowler Mark Adair for two successive fours at the start of the sixth over before launching offspinner Andy McBrine for an inside-out six over wide long off. Ghani rotated the strike well and often found the boundaries, forging important stands with Gurbaz, Hashmatullah Shahidi and then Najibullah Zadran. He reached his half-century – the second against Ireland in the format – off 35 balls to guide a sluggish Afghanistan batting unit. When Ghani eventually fell in the 15th over, he had laid a good foundation for the lower order to lift off from.

A roller-coaster of a bowling performance

Ireland had an iffy sort of a day with the ball. While they were excellent in patches, regular boundary balls released most of the pressure. A few of the bowling changes also did not help Ireland’s cause. On a surface that had a bit of carry and steep bounce, Joshua Little and Adair were all over Afghanistan in the first three overs. They bowled the hard lengths and had Gurbaz, in particular, in a lot of strife.

Then, for some reason, Balbirnie introduced the spin of McBrine into the attack. And that is just what the Afghan openers were searching for. Gurbaz, who was on 4 off 12 balls at one point, smashed McBrine for three fours in an over to release the shackles. Ireland did manage to contain the Afghanistan batters in the middle overs with only 34 runs scored between overs 13 and 18 and the hosts striking four times.

However, a wayward final over from Adair once again turned the momentum towards Afghanistan. Trying to experiment a bit too much, he fell off his lengths as Ibrahim carted him four two sixes, a four and two doubles to take Afghanistan to a slightly above-par total.

With a highest score of 14 in his last five T20I innings, Balbirnie had been under fire for a while. However, when required the most, he stood tall for his team. The Ireland captain looked the part from the get-go. He started off his boundary counter by smashing Mujeeb Ur Rahman over fine leg for a six before Fazalhaq Farooqi was cracked for two fours in the third over. Even as Paul Stirling played out a maiden at the other end, Balbirnie was not fussed. He found boundaries at regular intervals, and even his singles had a stamp of authority. Once Stirling fell, it was Tucker’s time to shine. Both batters were unruffled through the middle overs. They played out Rashid Khan sedately but also made sure they rotated the strike whenever the chance arose. Balbirnie reached his seventh T20I half-century off 34 balls while Tucker reached his fourth off 31 balls. The duo added 62 runs for the second wicket.

Ireland almost fail to close out a game, again

The entire summer has been a case of so near yet so far for Ireland. They have failed to close out games having done all the hard yards. And, once again, they found themselves in a similar situation. At 121 for 1 after 14 overs, most would have hedged their bets on Ireland chasing the target down. But, the Afghanistan bowlers kept the fight on. The equation finally came down to Ireland needing 23 off the last two overs. Farooqi then bowled a decent 19th over that went for just ten runs despite Tector smashing a six off the second ball.

Naveen, who had been impressive all day, was then tasked with the final over. However, he struggled with his lengths and was first carted over extra cover by Tector before Dockrell finished off the chase with a four straight down the ground and a cross-batted heave between deep mid-wicket and long-on. For the kind of two months they have had, Ireland deserved to close this game out.

Ashish Pant is a sub-editor with ESPNcricinfo