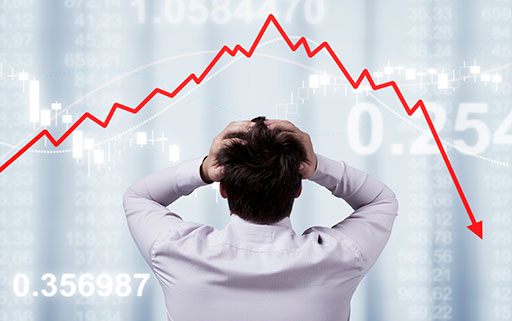 TCS and Power Grid were among the top gainers today.

Tata Steel, Wipro, and Reliance Industries, on the other hand, were among the top losers today.

The broader markets also ended on a weak note. The BSE MidCap index and the BSE SmallCap index ended lower by 1.5% and 1.1% respectively.

All the sectoral indices ended in red with stocks in the media sector, metal sector, and realty sector witnessing most of the selling.

As Indian share markets are in a downtrend, you must be wondering when will the markets fully recover.

In this uncertainty, check out these 5 fundamentally strong companies which pay regular dividends and are undervalued.

Value investors should not miss these five stocks trading at steep discounts.

Also, check out this stock we call as the greatest dividend stock of all time. This IT company’s dividend growth rate has beaten Nifty’s 20 year annual returns.

Asian stock markets ended on a weaker note as the markets exhibited concern of inflation and increasing interest rates thereby increasing the fear of being pushed into recession.

The Nikkei plunged 0.4% while the Shanghai Composite declined 1.2%. Meanwhile, the Hang Seng plummeted by 2.6% as the Japanese Yen hit a fresh 24-year low against the dollar.

US stock futures are trading on a negative note with the Dow Futures trading down by 362 points.

In its June meeting, the US Federal raised its interest rates by 75 basis points. This is the largest hike since 1994.

Watch this video to know what to investors should do when interest rates are rising.

In news from the currency space, the Indian rupee tumbled to a record low of 78.29 a dollar in today’s trade amid a slide in Asian currencies on a firm dollar.

Join Us on YouTube Now: No Guessing, No Hunches, and No Missed Trends Ever!

The fresh fall was seen amid selling in emerging market equities and currencies ahead of the US Fed Chair Jerome Powell’s testimony to US Congress later in the day.

There are expectations that Powell will reinitiate Fed’s commitment to curb inflation. This has helped the dollar stay firm against a host of emerging market currencies.

The dollar index, which compares the greenback’s strength against a basket of six currencies, advanced 0.32% to 104.76.

The persistent weakness in the rupee has also intensified amid foreign investor outflows. Widening trade deficits and high crude oil prices are also restricting gains of the rupee.

As per data, foreign equity outflows have topped Rs 400 bn in June so far, taking year-to-date outflows to Rs 2.07 tn.

Experts expect the rupee to remain volatile this week as the Fed seems firm to hike rates sharply several more times this year.

Moving on to news from electric vehicle space, as Indian automakers have lined up US$ 5 bn of investment for manufacturing EVs, auto component producers are seeking to march in step by boosting capital expenditure.

According to a recent study of 49 auto ancillary companies, the auto component industry is expected to devote around Rs 167 bn in financial year 2023 for capital expenditure and around Rs 208 bn in 2024.

Under the PLI scheme for auto components, 75 companies are planning to invest Rs 298 bn over the next five years.

Sona Comstar, which makes motor control units, among other things, said it had identified electrification as an irreversible trend as early as 2016.

The company has planned capital investments of about Rs 9 bn over the next three years to expand capacity.

Sona Comstar has an order book of Rs 186 bn of which 62% is from EV programmes.

Speaking of EVs, have a look at the chart below which shows the massive opportunity in the two-wheeler EVs.

Here’s what lead Smallcap Analyst at Equitymaster, Richa Agarwal wrote about this in one of the editions of Profit Hunter:

As per Richa, this is like a gold rush. But like in any gold rush, the winners will just be a few.

State-owned natural gas processing and distribution company enters into production with the vision to cater to the demand from off-grid locations and the transportation industry in the country.

GAIL India in its press release termed it a first-of-its-kind initiative and confirmed that the company has already placed an order for two small-scale liquefaction skids that can produce LNG on a pilot basis.

The company also stated that the process of liquefaction will be carried out using movable liquefaction skids that are based on exclusive technology.

These plants will reportedly facilitate the installation of LNG filling stations and bunkering, as well as the liquefaction of natural gas in new CGD regions and other remote fields.

The project aims to provide the government of India’s focused programmes with additional momentum in their pursuit of raising the share of natural gas in the primary energy mix.

Additionally, GAIL is in talks to manufacture liquefaction skids in India.

To know more about the company, check out GAIL India’s financial factsheet and its recent quarterly results.

Our FREE Guide: Small Caps That Will Race Ahead of the Sensex

‘Small Caps That Will Race Ahead of the Sensex’:

When you sign-up for Richa’s One Stock Crorepati mega summit, you get this premium guide worth Rs 950 for absolutely FREE.: