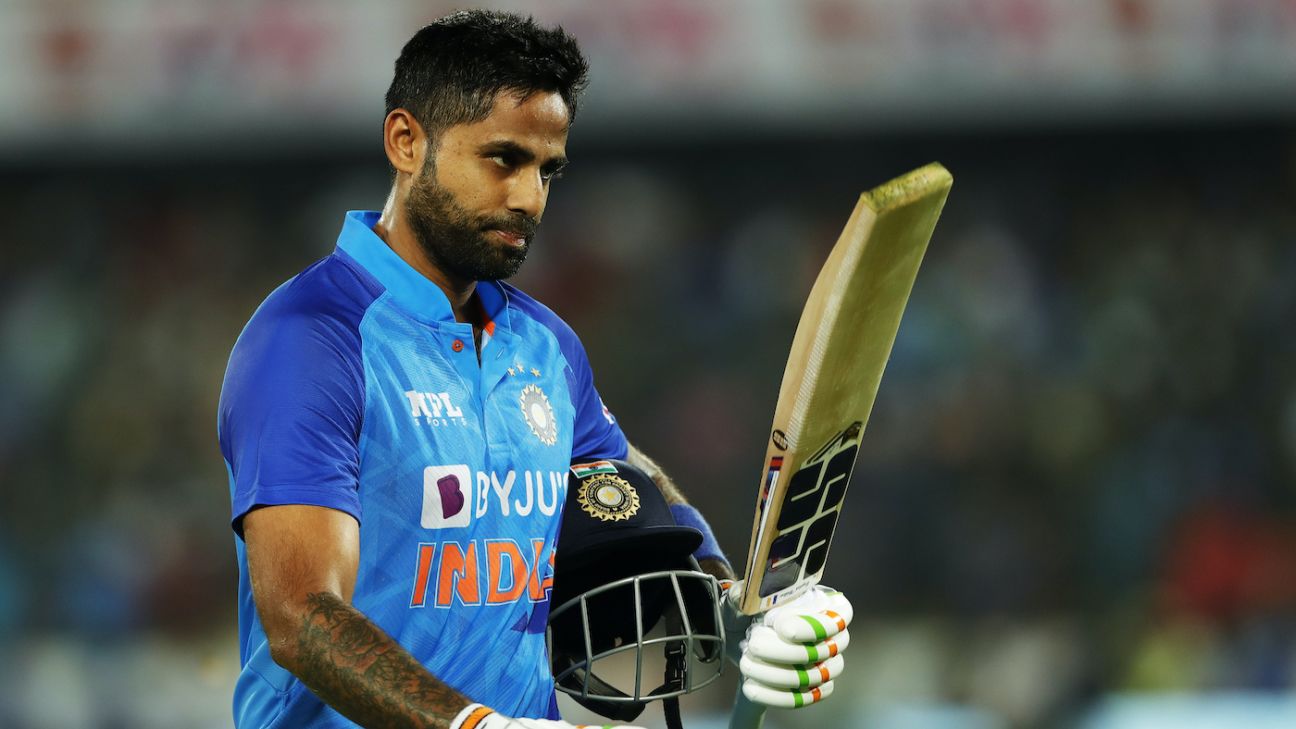 Suryakumar Yadav was laid low by a sick bug on the morning of the deciding T20I against Australia in Hyderabad on Sunday. But he didn’t let the illness come in the way of his participation in the match.

“I won’t just sit out saying it’s an illness. So do whatever, give me whatever pills or injection you want, but just get me ready for the game in the evening. Once you go into the match and wear that India jersey, the emotions are totally different.”

Eventually, Suryakumar not only took the field, but made a vital contribution in India’s series-clinching victory. His 36-ball 69 in a century stand with Virat Kohli helped India overcome a wobble at the top to chase down 187 in the final over.
Suryakumar hit five fours and as many sixes and his trademark 360-degree game was on display. During the course of his knock, he surpassed Mohammad Rizwan to become the highest scorer in T20Is so far in 2022.
So far, he has made 682 runs in 20 innings at a strike rate of 182.84 this year. The tally includes four half-centuries and a hundred, against England at Trent Bridge. His impressive run of form vaulted him to third among all T20I batters, behind Pakistan’s Rizwan and South Africa’s Aiden Markram, on the ICC’s rankings.

Suryakumar couldn’t help but exude self-belief when asked of his success mantra. “I practice the same way as I want to bat in the match,” he said. “I believe in just one thing: go and express yourself. If my success rate is above 75%, why not? I just think when I walk out, if I’m batting well, then I try to carry that phase on and try and finish off games.”

On Sunday, while Suryakumar didn’t finish off the game, he had taken India to the doorstep of victory. Having slapped Josh Hazlewood for six and a four earlier in the 14th over, he holed out to long-on. By the time he was dismissed, India’s ask was a manageable 53 off six overs with seven wickets remaining.

At the press conference, India captain Rohit Sharma was effusive in his praise for his colleague. “When it comes to Surya, we all know the quality he has,” Rohit said. “He can play shots all over the ground. And that is what makes him special. He has been very consistent with the bat. Every time he has gotten an opportunity, he has played an important innings for us.

“Every time I see him, he has taken his game a notch higher which is a good sign as a player. Whenever you see that you can raise the level of your skills of what the team expects from you, it’s always a good sign. I can see that in Surya, every game that I see of him, every game that he plays, he seems to be getting better and better every time. And today was an exceptional innings.

“To come out and play the innings that he played, we were two down in the powerplay. And to take the game away, literally, from the opposition was a fantastic effort. And not to forget Virat on the other side as well, what a crucial, crucial partnership, 100 partnership. From the team’s perspective it was a good sign.”

Kotak, Cooley and Dilip put in charge of India A in Bangladesh