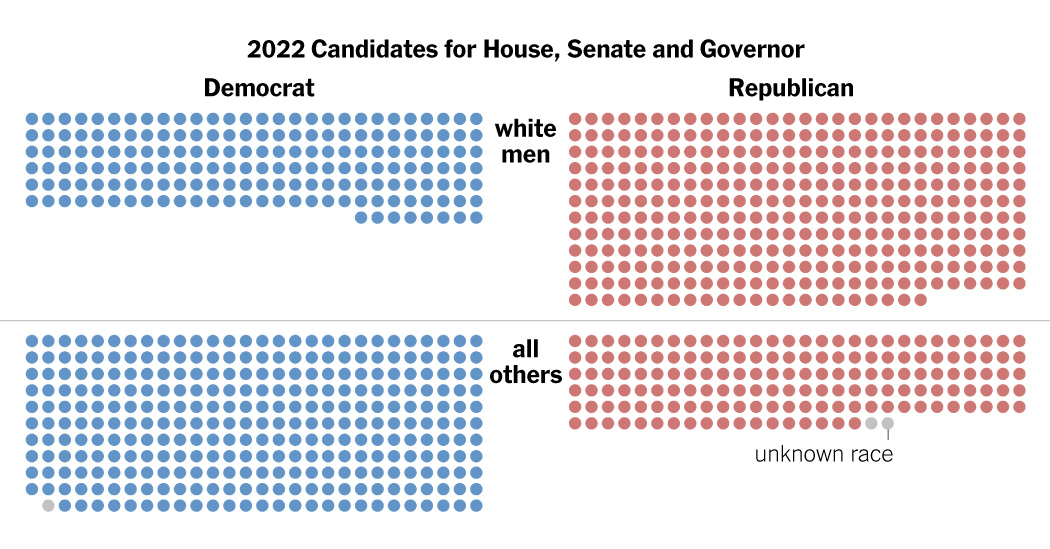 After a pair of triumphant elections for women and people of color in American politics, in which records were smashed in 2018 and then broken again in 2020, diverse candidates made further progress this year.

More women than ever have been nominated for governorships and state legislatures. More Senate nominees are Black. More House nominees are openly L.G.B.T.Q., and more are also Hispanic women.

But there has also been some backsliding: The number of women nominated for Congress, for example, has declined from a 2020 peak.

There remains a significant partisan divide, with Democrats more likely than Republicans to nominate people who differ from the historical norm of straight, white men. And while both parties’ candidate fields are more diverse than before 2018, they are still far from accurate reflections of the American population.

The House of Representatives

There are at least 403 people of color, women or nonbinary candidates running for seats in the House of Representatives in Tuesday’s midterm elections.

A record 37 candidates are women who are Hispanic or Latina, including people who also identify with a second ethnic or racial group.

And there are 33 openly gay, lesbian, bisexual, transgender or gender-nonconforming candidates, a number that has nearly doubled since the 2018 elections, according to the L.G.B.T.Q. Victory Fund.

The last two election cycles were momentous when it came to women’s representation: The number of Democratic women skyrocketed in 2018, and Republican women had their own breakthrough year in 2020, though their numbers remained much lower than Democrats’.

But this year, both parties nominated fewer women for the House than in 2020.

The numbers are still much higher than historical norms, and whether the decrease in nominees translates into a decrease in women who actually serve will depend on the results of several dozen close races.

“I wouldn’t raise the red flag of, ‘Oh, my gosh, we’re seeing a complete regression in women’s candidacies,’” said Kelly Dittmar, the director of research at the Center for American Women and Politics at Rutgers University, which compiled comprehensive data about the women nominated this year.

“But at the same time,” Dr. Dittmar said, “in an arena where women are perpetually underrepresented even at record-high years, any drop is significant enough for us to pay attention and say we clearly haven’t cleared the hurdles.”

There are at least 31 women and people of color running for Senate.

There are 11 Senate candidates who are Black this year. That is as many as have served in the Senate in all of American history.

Comparisons between election years are tricky for the Senate, because only a third of its seats are up for election at a time. But this number stands out.

Of the 11, a record four are Black women, a group not currently represented in the Senate at all. Only two Black women, Carol Moseley Braun and Kamala Harris, have ever been elected to the Senate.

The chances that any of these women will be elected are not high: All four are Democrats running in Republican-leaning states, and only two, Val B. Demings in Florida and Cheri Beasley in North Carolina, are in competitive races.

But looking at the total number of Black candidates, “considering that we’ve really only had less than two handfuls of Black people be elected to the U.S. Senate in American history, to have 11 running and to be their party’s nominee in the state is extraordinary,” said Stefanie Brown James, a co-founder and senior adviser at the Collective PAC, which works to elect Black people to public office. “I think it’s really a testament to how much the bench has shaped up as it relates to Black candidates, and I think it signals, hopefully, a lasting change.”

Advocates who work to increase political representation emphasize that, final outcomes aside, having a more diverse set of nominees provides concrete benefits: It encourages more candidates to run in future elections and sets examples so that those future candidacies do not strike voters as out of the ordinary.

At least 30 women and people of color are running in governor races.

There are 25 women nominated for governor — 16 Democrats and nine Republicans. This not only sets a record but is more than double the historical average in midterm election years from 1990 through 2014.

There are five Black nominees for governor this year, including a record three Black women.

Before this year, Stacey Abrams in 2018 was the only Black woman ever to receive a major party’s nomination for governor. To this day, none have been elected, and only two Black men have been elected to governorships.

The overall advancements for women are striking. In five states — Alabama, Arizona, Iowa, Michigan and Oregon — the Democratic and Republican candidates for governor are both women. Before this year, there had been only four such races in history.

And, while four L.G.B.T.Q. nominees for governor is not a new record, this year’s nominees include two — Maura Healey in Massachusetts and Tina Kotek in Oregon — who could become the first openly lesbian women elected to a governorship. Voters have previously elected one gay man (Gov. Jared Polis of Colorado, who is up for re-election) and one bisexual woman (Gov. Kate Brown of Oregon, whom Ms. Kotek is hoping to succeed).

“Voters are more comfortable seeing women being part of a deliberative party as a decision maker, but if she’s going to be essentially the decision maker, voters require a lot more evidence that she’s qualified for the job,” said Amanda Hunter, the executive director of the Barbara Lee Family Foundation, which supports women in politics and has found in its research that voters are more hesitant to elect women to executive roles.

State legislatures often get short shrift in discussions about political diversity, in large part because there is no complete dataset of the demographics of their thousands of members. But, in addition to being enormously important in enacting policies that affect how Americans live and how their elections are run, they serve as pipelines to higher office. This means that diversity, or a lack thereof, in state legislatures can affect diversity in Congress and governorships years later.

The composition of state legislatures is unreflective of the overall population, according to research from New American Leaders, a group that works to involve immigrants and first-generation Americans in politics. This stems from an array of factors, some of which vary by state: Many legislatures are part time and pay very little, for example, making them unrealistic for people who are not wealthy.

But there have been some advances this year. A record 3,614 women are major-party nominees for state legislative seats, according to the Center for American Women and Politics. (Nearly twice as many are Democrats as Republicans.)

And in some states, including Michigan and New York, New American Leaders has identified significant increases in first-generation candidates from 2020 to 2022. Many of these candidates are Black, Hispanic or members of other racial minorities.

The increase in representation in state legislatures in recent years has been “incremental growth, but it is steady growth,” said Ghida Dagher, the president of New American Leaders. “I think people feel a call to action and a call to serve, so they are seeing themselves in the policies that are being pushed forward and the decisions that are made and the budgets that are passed.”

The Week in Political News

4 Takeaways From the Campaign Trail

How Election Lies Took Over the Republican Ticket Nationwide