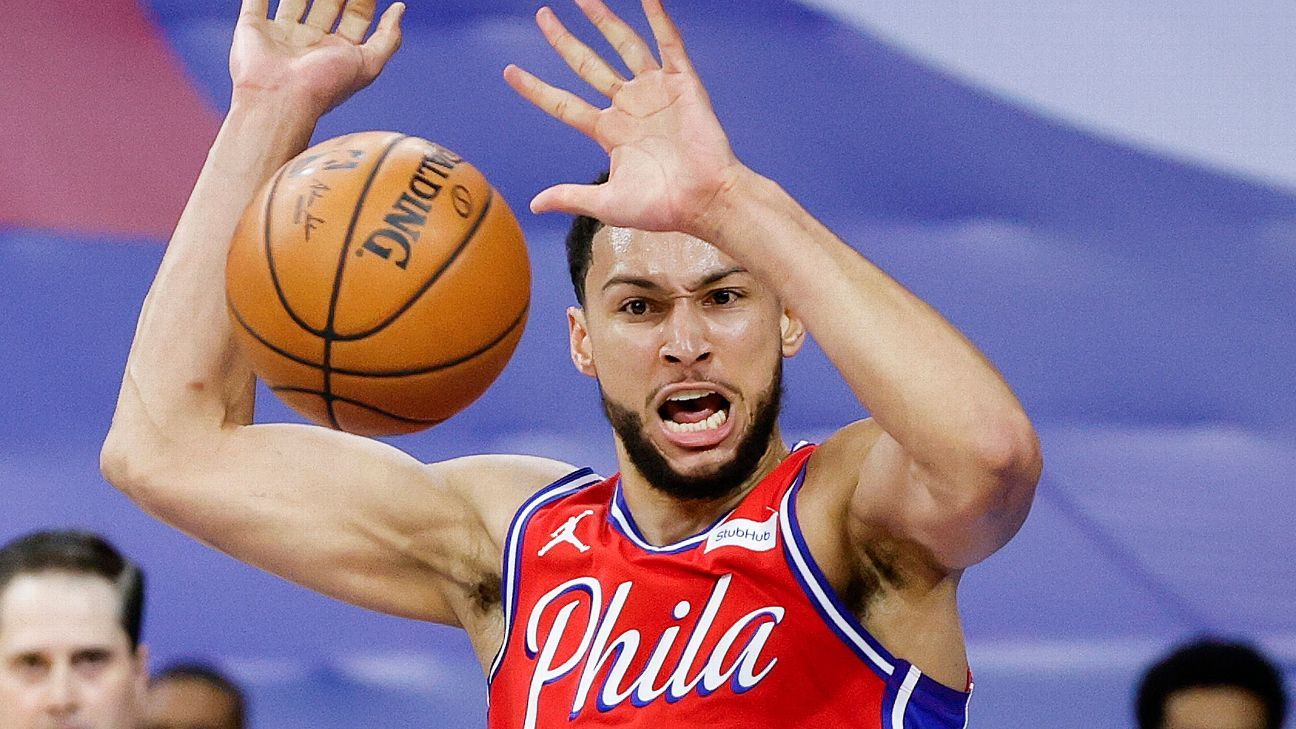 As Friday night’s game between the Boston Celtics and Philadelphia 76ers wore on, Ben Simmons was nowhere to be seen. Through three quarters, Simmons had eight assists but only four points on just three shots, and he appeared well on his way to a fifth straight game with single-digit shot attempts in a continuation of what has been a quiet start to this season.

But then, as Boston cut Philadelphia’s lead to four midway through the fourth quarter, and threatened to potentially steal the second half of this two-game series between these rivals, Simmons burst onto the scene.

He fought on the offensive glass to score off his own miss. He stormed down the lane for an and-1 bucket. He picked off a pass in the open court, one he took the other way for a dunk — and that was immediately followed by a timeout from Celtics coach Brad Stevens.

In the span of 36 seconds, the game went from being a toss-up to one that was clearly going to end with a Sixers victory. That stretch, the key segment in Philadelphia’s 122-110 victory, was a reminder of just how impactful Simmons can be — and that those types of moments haven’t come along all that often to start this season.

“It’s been good,” Simmons said after finishing with 15 points — 11 in the fourth quarter — and 11 assists, when asked how he has felt about this season, and if he has heard the criticisms of his start to it. “It’s a new season. I’m just focusing on winning, and doing what I can to win with this team. I think it’s been good.

“I don’t go on Instagram, I don’t go on Twitter, so I can’t really answer the questions in terms of what people are saying, because I don’t give a f—, honestly. But unless [head coach] Doc [Rivers] is saying something, or [assistant coach] Sam [Cassell], or people are coming to me, it’s a different story.

It’s been a strange start to the season for the Sixers. They have the Eastern Conference’s best record, at 11-5, but feasted on a soft schedule early before the past two weeks have been consumed by first the Sixers having several players missing due to the NBA’s health and safety protocols, followed by them playing four games against Miami Heat and Celtics squads that were depleted for the same reason.

Joel Embiid has arguably been the NBA’s MVP through the first month of the season, and he followed up his 42-point performance Wednesday with a 38-point outburst Friday night, one punctuated by his taking another shot at the Celtics’ Marcus Smart for being frustrated by his foul drawing in Wednesday night’s game.

“I knew coming into the game, after they complained, I knew the officiating was going to be, you know, a little tight for us, and I guess better for them,” Embiid said after getting 15 free throws Friday night, compared to 21 in Wednesday’s win.

Ben Simmons anticipates the pass to get the steal, then hurries down the court to flush a two-handed dunk.

Tobias Harris, meanwhile, has looked again like the player he was when playing for Rivers with the LA Clippers — the one the Sixers paid a hefty price to trade for two years ago, and then paid $180 million over five years to retain as a free agent. Harris shot 10-for-12 and scored 23 points Friday, after scoring 22 points Wednesday. And the moves the Sixers have made to better balance the roster, swapping Al Horford and Josh Richardson for Danny Green and Seth Curry, respectively, have worked out as well as they could’ve hoped.

But for this team to be the championship contender it aspires to be, the Sixers need the version of Simmons that took over for that 36-second stretch in the fourth quarter — a version that those watching the Sixers have been waiting to see emerge more often than it has.

Much has been made of Simmons’ shooting — or lack thereof — from 3-point range. But what stood out about the plays he made in the fourth quarter was his aggression. In nine of his 14 games this season, Simmons hasn’t taken 10 shots, and his points per game, shots per game, field goal percentage and usage rate have all dipped this season.

Still, he said he’s quite happy with his role.

“So I’m going to continue to grow my game and get better for my team. But, ultimately, I just want to win. And however I need to do that, whether it’s getting 10 steals and no points, no rebounds and 50 assists, whatever it is, I’m going to do.”

No one would argue that Simmons’ skill set is a rare one. He’s listed at 6-foot-11 and 240 pounds, yet is often the fastest player, and best passer, on the court — not to mention being capable of guarding virtually anyone, as he did Friday in switching between the small and shifty Kemba Walker and Jaylen Brown, one of the most athletic wing players in the league.

But it is precisely because he has so many skills at his disposal that causes so much attention to be drawn to his play when he doesn’t make the type of impact he did in the fourth quarter Friday night. Simmons’ quiet nights offensively this season have been noticed by opposing scouts, and have happened enough that it has been a regular topic of discussion that Rivers has had to address on several occasions this season — particularly as the potential of Simmons being the centerpiece of a James Harden trade hung over the franchise.

“He didn’t do it until the end of the game tonight, but he was already playing great,” Rivers said. “And that’s the point I’m trying to make to everybody. He’s doing so many things for this team. His winning formula is amazing in all the things. Last night, he got like no credit.

“He was so important to why we won that game with all the things he’s doing, the little cuts, the little back picks, the rolls and passes. Ben does a lot, and so he can’t focus on one thing. Like focusing him on just scoring, he’s too good for that to me. It would be a waste if that’s all we focused on for him.”

For the Sixers to get out of the Eastern Conference, though, they’re going to need it. The Celtics came up short in both games this week but were competitive with Jayson Tatum sitting out because of the health and safety protocols, and with Kemba Walker still playing on a minutes limit. The Milwaukee Bucks still have Giannis Antetokounmpo, the league’s two-time reigning MVP, along with All-Stars Khris Middleton and Jrue Holiday. The Miami Heat have almost their entire team back from the group that won the East last year.

Oh, and then there’s that team up Interstate 95 in Brooklyn that happened to trade for Harden last week, and already had Kevin Durant and Kyrie Irving at its disposal.

Still, there’s plenty of time to gel for these Sixers, and there are reasons for optimism. Embiid and Simmons both talked Friday about their growing relationship on the court. The fact Harden has been traded, and the potential for him coming to Philadelphia has gone away, removes another distraction. And now that they finally have their full complement of players again, after getting Curry back Friday night, Embiid spoke after the game about the desire for the Sixers to go on a winning streak.

The chances of that happening, though, will only grow if Simmons can string together a series of games full of stretches like that 36-second span that cemented the outcome of Friday’s game.

“I love playing with him,” Embiid said. “That fourth quarter starts on the defensive end, and he was a monster. He got a lot of steals, and then in the half court off the pick and roll he was attacking, he was aggressive and he made plays, he scored a couple baskets.

How we got here — the Tiger Woods timeline

What we know about Tiger Woods’ crash, condition and what happens next

Kane, Haaland, Mbappe? Who could Man City sign to replace Aguero in the summer?

As Local News Dies, a Pay-for-Play Network Rises in Its Place

Jacqueline Fernandez goes topless in gratitude post as she hits 46...