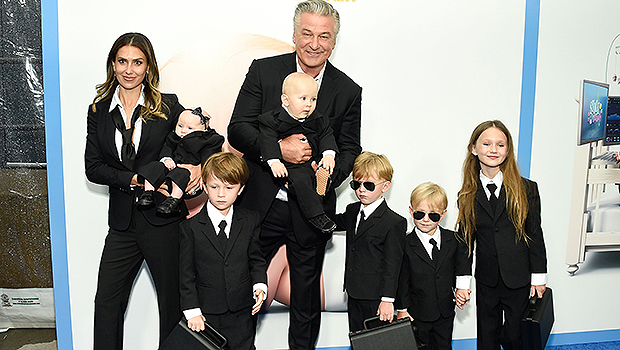 Hilaria Baldwin didn’t entirely say she wouldn’t be open to having more kids with husband Alec Baldwin, 64. “I would say that we’re done, but I said we were done with six,” she joked in a new interview with Extra, set to air on Monday, Dec. 5. “And yeah, I would say hopefully we’re done,” the yoga instructor, 38, added, before spilling some info that was perhaps TMI: “But Alec still has to go and do his part. So if he does not do his part, sometimes things can happen,” she then noted, making a scissor motion with her hand.

Alec has also previously addressed having so many kids via Instagram. “People comment about how many children we have and ask why,” he captioned a July 22 video. “This is why…The thing in this life that matters most to me are these people,” he said, sharing a video of his family.

Hilaria and Alec are often seen out and about with their kids for walks in New York City — including one last summer before latest addition Ilaria came along! With so many little kids, the couple were also joined by two nannies for the casual outing. The family also all matched in black suits for the Boss Baby sequel, which features Alec’s iconic voice.

When it comes to their parenting styles, Hilaria has described Alec as a bit of a “push over” while noting she’s “both good cop, bad cop” to People at the merican Museum of Natural History’s Annual Gala in New York City on Thursday, Dec. 1. She also revealed she has “two baby sitters” at home to be prepared for an evening out.