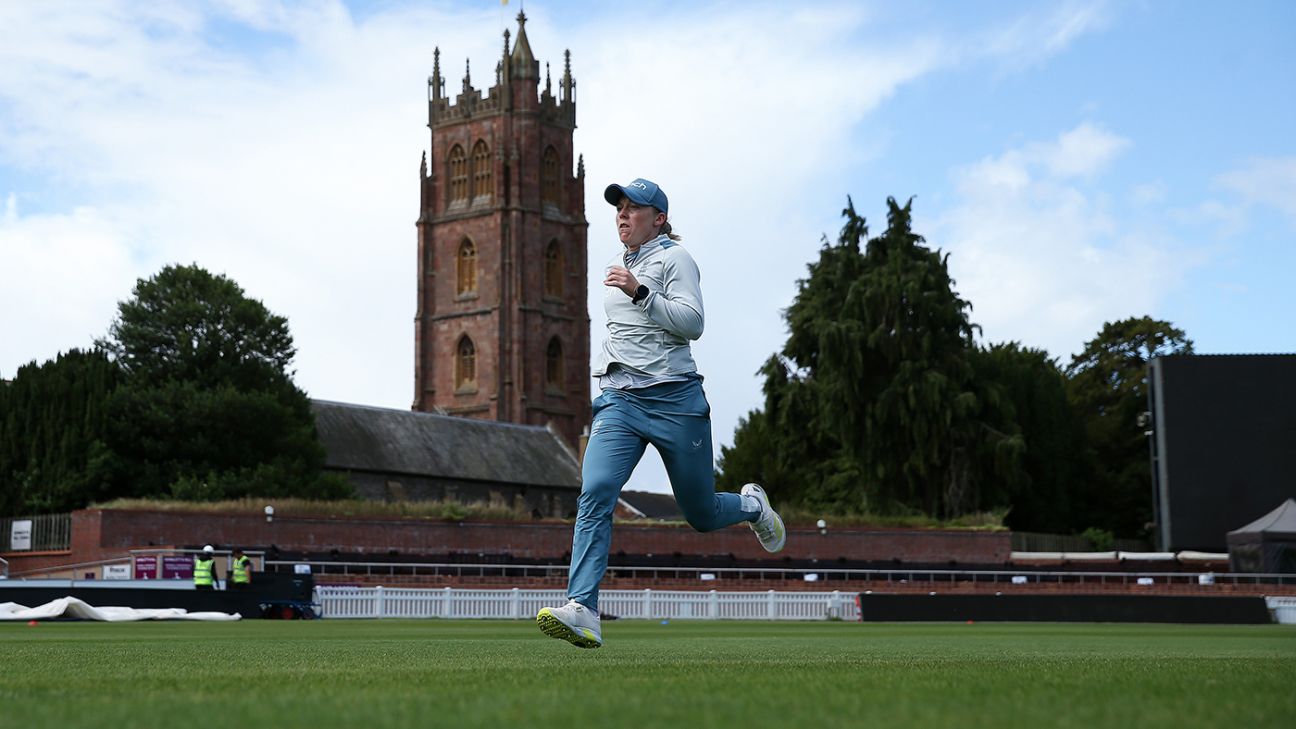 England Women are set to be bolstered by the return of Heather Knight for next month’s tour of West Indies, after England’s captain declared herself fit again following hip surgery.
Knight was sidelined for a large chunk of the home summer after injuring her hip during the first of three T20Is against South Africa in July. She missed the Commonwealth Games in Birmingham – where England finished a disappointing fourth – after a flare-up ruined her bid to play some part in the event and left her on crutches in constant pain.

It was at that time she decided to have an operation to repair torn tissue and damaged cartilage, and remove a piece of bone in her right hip joint which meant she missed India’s subsequent visit to England, the Hundred and the current WBBL. But Knight has come through a tough rehabilitation process to be ready to fly to the Caribbean for three ODIs, starting on December 4, followed by five T20Is.

“It feels like it’s been a long old rehab but I’ve just come good the last couple of weeks and am getting back to pretty much full training now,” Knight told ESPNcricinfo. “Fielding has probably been the one thing that’s been a little bit niggly and a little bit of pain, but I’ve had a really good couple of days so I’m fit to go to the West Indies, which is great.

“It’s just the last couple of weeks, certain positions that the hip didn’t really like, but the last few days it’s been good as gold so I’m ready to get back and play.”

Not only was the operation a success, Knight explained that it had slightly changed the shape of her hip joint to give her more freedom of movement.

“It’s actually a much healthier, better hip joint than it was,” she said. “It hadn’t been an issue that was on the radar, but I played in one of those T20s against South Africa and it flared up really badly and I knew it was something new that was not good.

Knight is thrilled that she can return to action against West Indies, with the ODIs forming part of the ICC Women’s Championship, in which England are yet to get off the mark following their 3-0 defeat by India in September. The five T20Is to follow will play a key part in England’s preparation for the T20 World Cup in South Africa in February.

Despite being “gutted” at spending so much time out of the game, Knight made good on her aim to make the most of it, enjoying seeing family and loved ones, travelling and moving house.

“Sometimes when you’re a cricketer you forget the other side of your life and here you are, outside of cricket,” she said. “It was slightly strange watching but I just tried to make the most of it and knuckle down with the rehab and work on a few other things that could hopefully prolong my career a little bit more.

I’ve had a little clean out of my hip to get me back and running soon. Unfortunately it rules me out of the India series and the WBBL, but I’m aiming to be back by the end of the year. Time to make the most of a bit of time away and bring on the rehab! pic.twitter.com/4Mcwjs2nwN

“It’s certainly been a tough grind, particularly the last month trying to get back into it and all the rehab you have to do. I don’t think you realise until you’ve gone through a serious injury the sort of hard work you have to do on a day-to-day basis to try and get back.

“I’m really grateful for the support I’ve had from the medical team. They’ve been outstanding and got me in a position that, obviously, I had to work very hard to get to, but a position where I could get back playing for England. I feel like I’ve lost a bit of time and I’m ready to get out there and get back playing cricket.”

For Knight, the hardest part was not being able to contribute for her team, particularly at a home Commonwealth Games.

“I felt like I could have played a really big role and helped us be successful,” she said. “It’s always tough missing out but those were the unfortunate cards that I was dealt.”

During Knight’s absence, England gave opportunities to a clutch of emerging players, including teenagers Alice Capsey and Freya Kemp, who thrived alongside fellow youngsters Issy Wong and Lauren Bell, debutantes earlier in the summer.
The youth policy is the legacy of Lisa Keightley, England Women’s head coach who left the post at the end of her tenure in September with the naming of her successor imminent. It also has Knight facing the prospect of returning to a side containing a number of players that she has yet to captain.
Nat Sciver skippered England through the Commonwealth Games before spending time out of cricket herself for mental-health reasons. Amy Jones led the side through the three ODIs and a 2-1 T20I series victory against India, a role Jones freely admitted took her out of her comfort zone.

Sciver is back training with England and “going good”, according to Knight, who acknowledged that Sciver stepping back from the game had been a courageous move, even though players are increasingly doing so to look after their mental wellbeing.

“It’s a really good decision and brave decision by her,” Knight said. “I still think it’s a tough decision but people like Nat taking time out and being very open with reasons, it’s only a good thing.

“It’s also a bit of an eye-opener to try and not let it get to that stage for a lot of players and making sure that we’re doing everything we can and managing ourselves better to try and not get to that stage. We have a lot of support medically to try and do that as well, but certainly it’s a topic that people are more comfortable talking about, in my experience, and being a bit more willing to be vulnerable when things are tough and you need to take that time.

“As franchise cricket increases and the amount of international cricket that we have increases, as players we have to find a way to find little pockets to get fresh and I think we’re all learning that. I think the place Nat got to, where she felt she had to take a break, it’s trying to learn and find ways to manage players and support them as best I can as captain, but also decisions above me in terms of workload management and trying to get players that are at their best for England at the right time.”

As draining as a failed Commonwealth Games campaign clearly was on many players who had hoped – and expected – to be among the medals, Knight is backing her side to enter the T20 World Cup without any scars.

“The Commonwealths certainly were a disappointment but you’ve got to remember you lost a T20 semi-final by four runs, one that could have easily gone our way, and then you’re in a gold-medal match,” Knight said. “There’s a lot of things we could have done better, but it’s also remembering the good things we’ve done and it’s not the end of the world. We’ve had a lot of success in T20s.

“We lost to India by four runs and T20 can sometimes swing like that. But I think we’ll take a lot of learnings from it, particularly the young girls playing in their first global competition. That experience will be great for them, they know what it’s about, they know the different pressures of tournament cricket and how it can affect you and how you can deal with that and hopefully take it forward into the World Cup.

“The girls winning that T20 series against India was brilliant, with the side we had. I think we had an average age of maybe 23 or 24, so a really good achievement to beat India 2-1 in that series after the Commonwealths.”