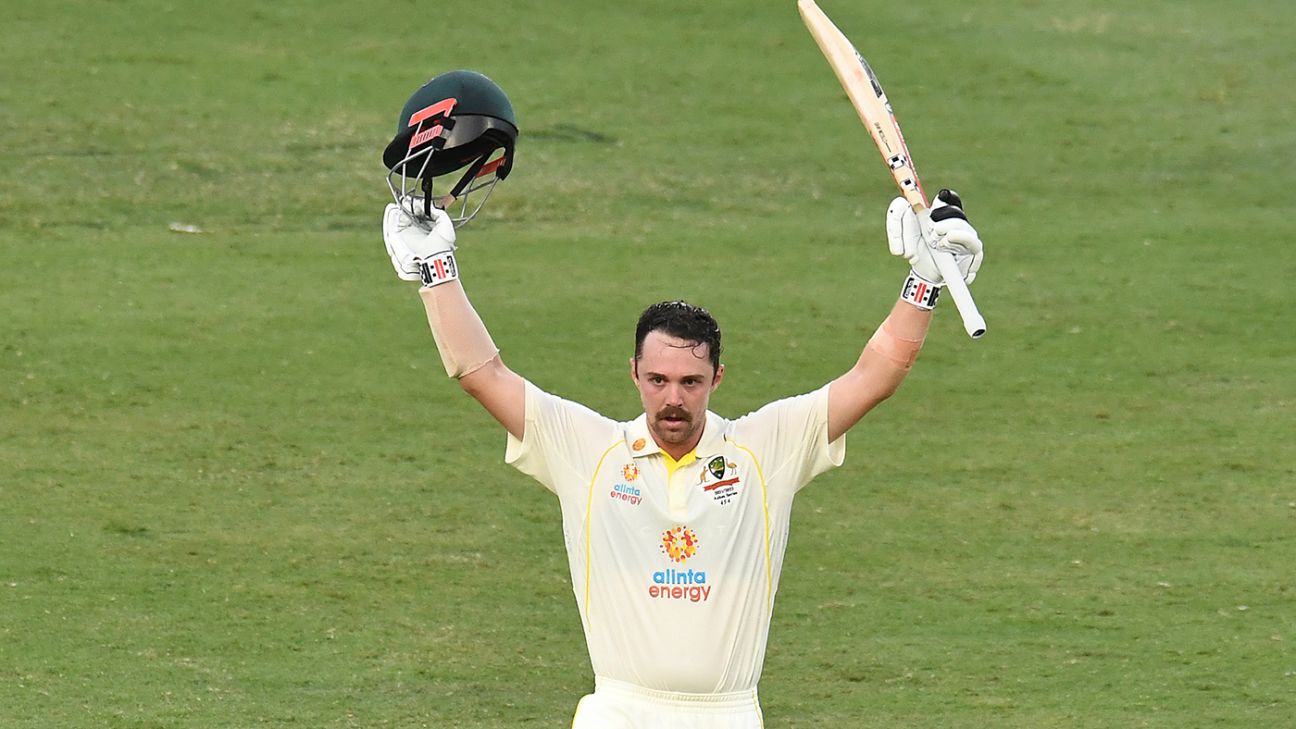 Travis Head thumped a century in a session to rip the game away from England after they briefly clawed their way back into the contest following another morning of self-destruction.

Head made the joint third-fastest Ashes century, off 85 balls, and became the first to score a Test century in a session at the Gabba, to torch any hopes England had after Australia had lost 4 for 29 in the afternoon to lead by just 48 with five wickets in hand. Australia finished the day with a lead of 196 and three wickets in hand with Head still unbeaten on 112.

Head’s century came on the back of a supreme 156-run stand earlier in the day from David Warner and Marnus Labuschagne, with Warner making an eventful 94, while Labuschagne a masterful 74 in difficult batting conditions to set the game up. Ollie Robinson bowled superbly to take 3 for 48, but limped off with a hamstring injury late in the day while Ben Stokes also battled a leg issue and a host of no-ball problems, including bowling Warner on 17 when he overstepped. Mark Wood also bowled whole-heartedly all day for little reward.

Halfway through the day, Australia were ready to make England pay as their calamitous start to this series had turned from bad to worse. Australia were 166 for 1 with Warner and Labuschagne having passed England’s first-innings total on their own, with Warner having survived being bowled off a no-ball, dropped at slip, and missed being run-out.

A rare mistake from Labuschagne opened the door for England to keep the door ajar thanks to a superb spell from Robinson, only for Head to all but slam it shut. He tore into England’s weak links, thumping a struggling Stokes for three boundaries in an over to get his innings going. He then latched onto Jack Leach, just as Labuschagne and Warner had earlier in the day, hammering him with lofted strikes over long-on and powerful cuts and pulls. Leach took 1 for 95 from 11 overs, which did include four overthrows as England unravelled.

Head brought up his third century against the second new ball with a superb drive down the ground and celebrated to a standing ovation. Head had entered the Test as the last man picked for Australia, having beaten Usman Khawaja for the No. 5 spot, and might have cemented his place long term.

England only have themselves to blame for their predicament. Warner could have been out on 17, 48 and 60.

England bowled well in the first session without much luck as they induced a host of false strokes from Australia’s batters but only claimed one wicket. Marcus Harris’ lean run in Test cricket continued as he edged Robinson to slip for just 3. None of the 16 deliveries he faced until then would have hit the stumps but the slips cordon was ready and waiting for the eventual chance after he had played and missed a number of times.

But while they may rue their luck in some ways, England were culpable in a variety of ways.

Stokes added his name to a long list of culprits who have dismissed Warner off a no-ball, and has been guilty of doing it previously. The mistake was made worse when it was revealed he had bowled three no-balls in the lead-up without being called and 14 in total in the session, as the third umpire was unable to intervene due to a technology issue.

Rory Burns added to his dismal Test match by dropping a simple chance off Warner at slip on 48. He also should have been run-out on 60 after he clipped a ball off his toes and took off only for Haseeb Hameed to stop it. Warner slipped and dropped his bat as he groped for safe ground but Hameed’s throw missed the stumps.

Warner played 30 false shots in all including the chipped drive to mid-off which saw him fall six runs short of his 25th century. But his 94 was invaluable to Australia’s cause, and just one run short of his entire 2019 Ashes series tally.

Labuschagne’s innings was every bit as good as Head’s. In tough conditions, he left the ball with incredible judgement and pounced on anything loose. He and Warner waited and waited, absorbing long spells of quality fast bowling, particularly from Wood, before Joe Root finally had to turn to Leach. They assaulted him with a premeditated attack taking 31 from his first three overs. Labuschagne and Warner shared their fifth century stand and become the second-fastest Australian duo behind Don Bradman and Bill Ponsford to reach 1000 runs together, doing so in just 11 partnerships.

Labuschagne’s loose cut off Leach cost him a certain century then Wood had Steven Smith caught behind with express pace before Robinson returned after tea for two wickets in two balls. He deceived Warner with some extra bounce as he miscued to mid-off before Cameron Green shouldered arms and lost his off stump to a ball that nipped back off the seam. It was just reward for Robinson who had bowled magnificently without luck. Alex Carey made just 12, pulling Chris Woakes straight to midwicket as Australia’s lead looked set to be kept well under 150.

But Head put paid to that as Robinson limped off with a hamstring and Stokes limped through his final spell.