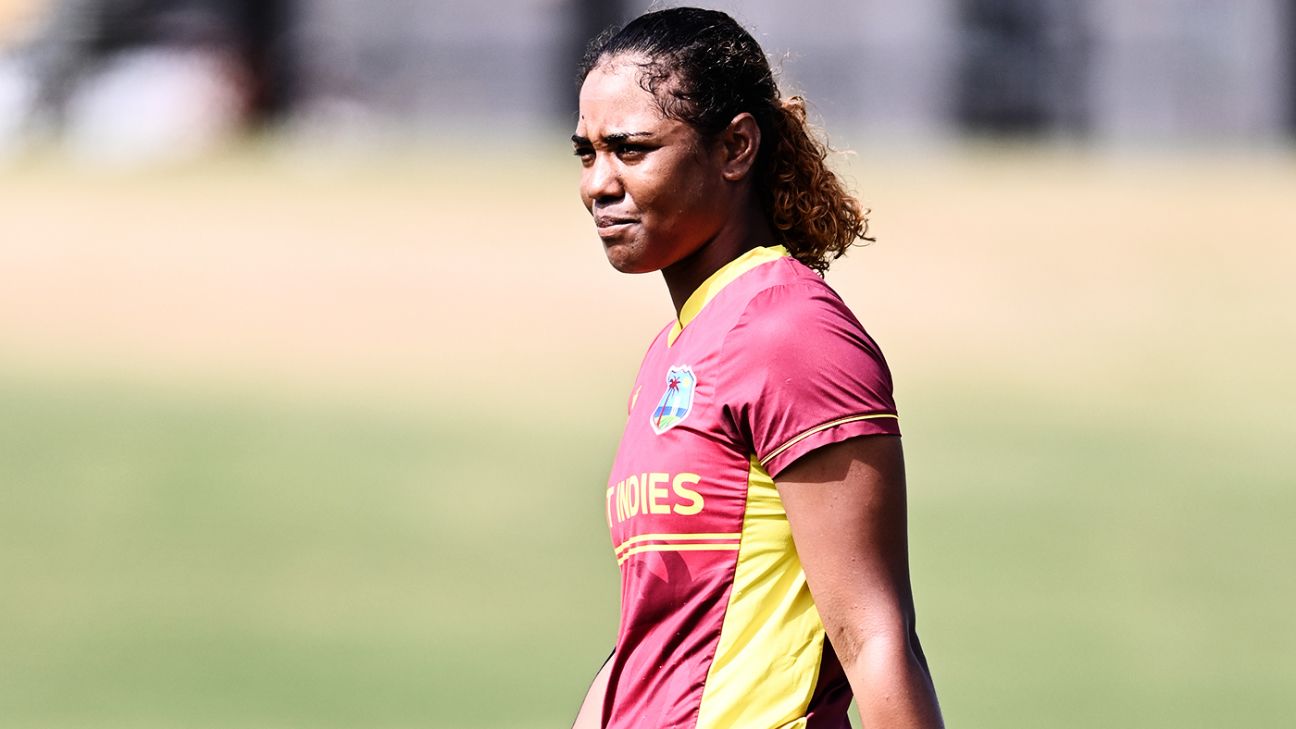 Batting has been West Indies’ Achilles heel in women’s T20Is for some time now. Their middle-order woes have been hampering them for over the last couple of years. Since January 2021, West Indies’ middle order (Nos. 4 to 7) averages 12.12, the lowest among the Full Member teams in T20Is. In their first match of the women’s T20I tri-series against South Africa, Shemaine Campbelle, batting at No. 4, made 11 of the 24 that the middle order scored.
While captain Hayley Matthews admitted it was a concern, she said that bigger contributions are needed from the top order, too.
“We’re missing a lot of big players,” Matthews said after West Indies’ 44-run defeat. “People like Chinelle Henry, who we usually have in the lower middle order that are capable of hitting the ball out of the park and even Chedean Nation, who played today but just hasn’t been able to get going just yet. So yeah, it’s the same story all around.

“We need to improve from the top right down to the bottom of our batting line-up in the way that we are playing at the moment. It’s pretty clear we are not being able to put big enough partnerships. At the same time we have a lot of injuries with key batters out.”

Their issues are not just restricted to the middle order. Since Deandra Dottin’s shock retirement last year, West Indies have yet to zero in on an opening batter to partner Matthews. Aaliyah Alleyne, primarily a bowling allrounder, had never batted above No. 7 in T20Is but was pushed up to open in nine matches – four against New Zealand and five against England all at home before the tri-series. The combination had a best partnership of 23 and she was not picked in the XI against South Africa on Saturday.

Brittney Cooper, who returned to the squad ahead of the series having last played a T20I in September 2021, opened the batting as West Indies added 32 for the opening wicket in their chase of 142. Cooper looked in fairly good touch, hitting three well-timed fours before being dismissed for 14 off 13 balls. Matthews said that West Indies are still trying to find their best combination at the top and backed Cooper to come good.

“At the moment we are trying players and we’re giving players the opportunity to grab that opening spot,” Matthews said. “Britney Cooper didn’t look that bad out there today, so hopefully she’s the one that can come out there and really produce [what we need]. The [T20] World Cup is the main goal for us and we are trying out different options to see what fits best.

“Sometimes as international cricket goes, it’s about digging deeper. At the same time we need to get some more runs at the top of the order. It’s not a matter of what’s happening at the toss as we have struggled to get runs both in the first and the second innings.”

West Indies also are working around managing Stafanie Taylor, as she makes her return from an injury layoff. She had to retire hurt in the third ODI against New Zealand last September and is working her way to getting back on the field.

“For now it’s just about the physio and medical people and the coaches managing the load with Stafanie,” Matthews said. “The T20 World Cup is the main picture for us here in South Africa and we want to try and manage her as best as possible and have her fit and ready for the World Cup.”